Air Ambulance to be on hand at North West 200 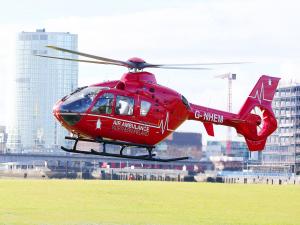 Northern Ireland's Air Ambulance will officially be up and running for the first time at the North West 200.

The Helicopter Emergency Medical Service (HEMS) is already on site and ready to go if needed this week.

AANI Chairman Ian Crowe says it is vital they're there because it's a high risk sport.

"The helicopter is here with a full medical crew on board but let's hope it stays on the ground.

"It's got plenty of interest so far but road racing is only a small element of what it will be used for during the year."

"Over the last few weeks we have carried out aerial surveys of some of the landing sites in preparation.

There will be six paramedics operating the service with emergency medical doctors working rotational shifts from most of the various hospitals throughout the province.

Air Ambulance Northern Ireland is currently looking for
volunteers to help at the North West 200. Please DM or reply for more information. pic.twitter.com/3Rz4IiiIa4

Ian says many of the consultants have already served on HEMS projects before and explains what will happen in the event of a crash this week.

"The chief medical director of the race, Dr David McManus can task the aircraft as soon as there is an incident at all.

"There is a separate helipad at the event and when an assessment is made if the rider needs support, the patient will be transferred more than likely to the Royal Victoria Hospital in Belfast."

However work is said to be ongoing at the helipad at the RVH and until it is fully operational in the coming months, the Air Ambulance is likely to bring patients to Belfast City Airport or Musgrave Park Hospital where they will be further transferred to the Royal.

The primary helicopter is usually based at Maze Long Kesh while a back up is parked at St. Angelo Airport, Enniskillen.

The service is Doctor-led and operates seven days a week for up to 12 hours a day during daylight hours.