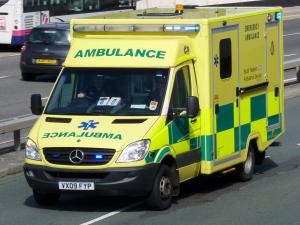 A child is fighting for his life after coming in to contact with a hazardous chemical on a bonfire site in Belfast.

The boy is thought to have inhaled fumes after opening up a drum illegally dumped at the structure off the Shankhill Road.

He's in intensive care in a critical condition while emergency services investigate the incident at the site in Glenwood Street.

DUP Councillor Frank McCoubrey has condemned those who dumped hazardous waste at a bonfire site in the Shankill Road area.

Ald McCoubrey said, “As we approach the summer young people are beginning to gather material at bonfire sites. There is absolutely no excuse however for anyone to use a bonfire site as a dumping ground for hazardous materials or to dispose of tyres.

In this case a child has been hospitalised because of whatever substances were dumped at this site. I would appeal for anyone who witnessed the material being left at the site to pass on any information to the police.

My thoughts are with the child and hope they make a full and speedy recovery.“

Following consultation with the Public Health Agency the PSNI are issuing a warning to members of the public after a number of drums containing a hazardous substance were dumped at a bonfire site in Glenwood Street in north Belfast.

Superintendent Andrea McMullan said: “A young boy is currently receiving treatment in hospital after it is believed he came into contact with this hazardous substance at the site.

“We are concerned that a number of other young people in the area could have potentially come into contact with this substance and are asking parents/guardians whose children may have visited this bonfire site to closely monitor them.

“The symptoms, which may include redness of the eyes and sore throats coughing and breathing difficulties can take up to 36 hours to become visible and I would encourage anyone who has concerns about their children to seek medical advice immediately. Any clothing or skin that may have been exposed should be washed to remove residual chemicals that may be left on them.”