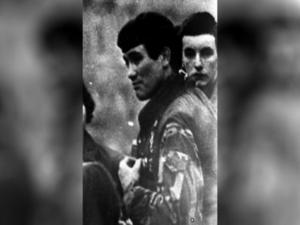 A forensic archaeologist has said there are no indications that an area in a forest near the Irish border was the burial site of former British Army captain Robert Nairac.

An examination was carried out on Tuesday by a commission responsible for locating those abducted and killed by the IRA during the Troubles.

The Army officer was abducted by the IRA during an undercover operation in a bar in South Armagh in 1977.

The search comes after a former British Army soldier said that a specialist dog trained to locate human remains had identified ground in Ravensdale Forest close to the border.

Alan Barry has been trying to locate Capt Nairac's body and first identified the area using a psychic medium.

After examining the area, the Independent Commission for the Location of Victims' Remains (ICLVR) said there were "strong indications" the wooded area was not and never had been a gravesite.

The ICLVR's lead forensic scientist and investigator Geoff Knupfer was assisted by an experienced archaeologist who has worked on previous searches for the so-called Disappeared, who were spirited away and secretly buried by republicans during the conflict, along with an assistant archaeologist.

Mr Knupfer said: "We were looking at quite a defined area at which the cadaver dogs had apparently given strong indications.

"We carried out a careful and painstaking archaeological examination.

"If the subsurface had been disturbed by a spade or any other device or implement cutting into it to bury remains we would have seen clear evidence of that.

"There was none. The subsurface was pristine. It was never a gravesite."

He continued: "One of the most important aspects of the Commission's work is in relation to communicating sensitively with the families of those who are still waiting for the remains of their loved ones to be returned for Christian burial.

"We have to make careful judgments not least in terms of managing expectations.

"Over the nearly 15 years that I have been leading the ICLVR's investigations, we have never told families that we know exactly the spot where their loved one is buried for the very good reason that we don't.

"We work from credible information and draw on years of experience with some of the best forensic archaeologists in Ireland and the UK to narrow down a site and all we can ever say with confidence is that if the remains are there, we will find them."

Capt Nairac was one of 16 Disappeared.

Most had been wrongly accused of being informers to the state.

Among them were west Belfast mother-of-10 Jean McConville, who was found on a beach in 2003.

Mr Knupfer added: "In the last five years, we have conducted four substantive searches and recovered the remains of four of the Disappeared.

"We are currently searching for Columba McVeigh in Bragan Bog in Co Monaghan and we hope and pray that that search will also be successful.

"But there are no guarantees where bodies have been secretly buried over 40 years ago.

"To suggest otherwise would be grossly irresponsible."

Anyone with information relating to the whereabouts of the remains of Columba McVeigh, Joe Lynskey or Robert Nairac is asked to contact CrimeStoppers on 0800 555 111 and the untraceable anonymous online form is at crimestoppers-uk.org.