Cost of replacing Belfast Primark store will be covered by insurance 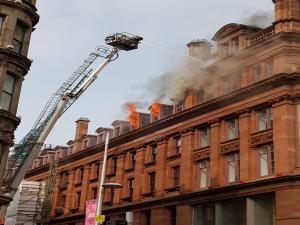 The cost of replacing the Belfast Primark store which was destroyed by fire will be covered by insurance, the company said.

The interruption to the clothing firm's business was also underwritten, an update from the retailer's owner Associated British Foods (AB Foods) said.

The front section of the listed sandstone building, which was being refurbished and extended at an estimated of cost of £30 million, was destroyed by last month's blaze.

Some 1,500 staff and shoppers were safely evacuated from the blaze but the embers smouldered for three days.

Firefighters were able to prevent the flames spreading to an extension at the rear of the building.

A statement from AB Foods said: "The Primark store in central Belfast was sadly destroyed by fire in August.

"All staff and customers were quickly and safely evacuated from the building.

"The replacement cost of the building and resulting business interruption is insured."

Primark has said it will continue to pay its Belfast workers until December 31.

Around 300 people worked at the discount fashion chain.

A safety cordon around the building will remain in place for at least four months.

This sparked fury from other businesses who remain within the sealed-off zone and unable to trade, with some calling for the Bank Buildings to be demolished, instead of work continuing to preserve the historic facade.

From this week, where this can be safely facilitated, the Council will begin assisting traders located within the cordon who wish to access their property.

A list of vacant properties that could be used for possible relocation has been drawn up, and a facility for temporary office accommodation at various locations has been offered to businesses.