My Love Is Your Love 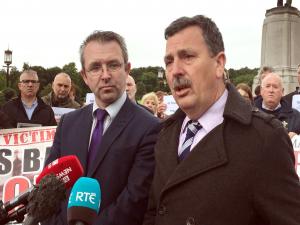 Victims campaigners have warned the UK Government not to kick issues related to Northern Ireland's toxic past "down the road".

Bereaved relatives expressed concern that proposed mechanisms to deal with the legacy of the Troubles remain in the starting blocks due to the ongoing powersharing impasse at Stormont.

A wrangle over how to address the fall-out from the conflict is one of a series of logjams preventing the formation of a devolved government in Belfast.

John Teggart, whose father Danny was shot dead by the Army in Ballymurphy in west Belfast in 1971, was among the protesters who gathered at Stormont on Tuesday.

"As the talks come to an end we see the legacy of the past is going to be booted down the road again," he said.

"It has happened many, many times. People like ourselves have been waiting for 45 years for truth and justice and it's not happening.

"Our loved ones are dying, witnesses are dying year on year and I think that's what the British Government are waiting on - for us not to be about any more.

"But there are generations we know that are going to follow on when we are gone."

While a raft of proposals, including a new investigatory body, a truth recovery mechanism and an oral archive, have been agreed by Stormont politicians, they are on ice due to a small number of outstanding disputes.

One of the main bones of contention is the thorny issue of national security and republican fears the Government would cite that as a reason to withhold documents to bereaved families.

In lieu of an overall agreement on legacy, a number of initiatives are not being actioned, such as the creation of a new coronial unit to process outstanding inquests.

The Government is keen to conduct a public consultation exercise on the proposed legacy mechanisms before they are implemented.