What Do You Want From Me

LISTEN:DUP and UUP fail to come to agreement on Unionist pact 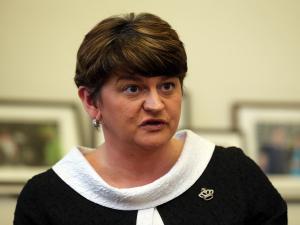 The leaders of the DUP and UUP have failed to reach an agreement on a pact for the Westminster election.

Political parties are set to announce their final line-up of candidates ahead of the deadline for nominations later this week.

The head of the Orange Order is Edward Stevenson.

He thinks a unionist pact would be to the benefit of people here:

Here's a joint statement from Arlene Foster and Robin Swann:

“The forthcoming General Election on 8th June is of significant importance to the United Kingdom in general and Northern Ireland in particular. As leaders of Unionism we want first and foremost to encourage all those in Northern Ireland who value the Union between Northern Ireland and the rest of the United Kingdom to vote in the General Election. Regardless of whether people identify with a particular party affiliation or with none we urge all those who believe in the Union and its benefits to support Pro-Union candidates.

Both of our parties want to see the strongest possible vote for Pro-Union candidates standing in all of the eighteen constituencies across Northern Ireland. We are committed to work co-operatively to do all we can to maximise voter turnout.

While our parties have not concluded any formal pact arrangements on this occasion we are resolved to continue discussions in the interests of better unionist co-operation beyond this election period.

In the constituency of Fermanagh and South Tyrone the DUP is not fielding a candidate and we urge all those who support the Union and who want to see a working Member of Parliament returned to vote for the Ulster Unionist Party candidate Tom Elliott.

In the constituency of North Belfast the Ulster Unionist Party is not fielding a candidate and we urge all those who support the Union and who want to see a working Member of Parliament returned to vote for the Democratic Unionist Party candidate Nigel Dodds.

We are collectively determined to make the case for the Union and to work together in the best interests of all the people of Northern Ireland. It is in that spirit that we will conduct our respective election campaigns.”