DUP says the backstop is 'poison' in Brexit deal 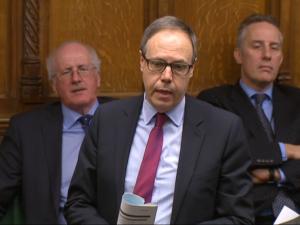 The Democratic Unionist Party has stepped up its opposition to the "toxic" Brexit deal.

Deputy leader Nigel Dodds said the backstop provision remained the "poison" affecting any vote on the withdrawal agreement in the House of Commons.

Mr Dodds said: "Theresa May still insists that what she has negotiated is a good deal.

"She should remember that it would already have been consigned to the bin but for her pulling the vote in December."

He made the comments after the Prime Minister Theresa May confirmed on Sunday that the vote in Parliament would go ahead around January 15, despite speculation that it could be delayed for a second time.

Mr Dodds blamed the EU and the Irish Government for rejecting efforts to rewrite the deal or find a compromise.

"The responsibility for this lies primarily with the EU," he said.

"EU spokespersons have gone out of their way to reiterate that there will be no renegotiation of the Withdrawal Agreement.

"True to form the Dublin Government has quickly shut down any possibility of a breakthrough by its now familiar tactic of a fast and flat rejection of any form of compromise."

He added: "This is a time for the United Kingdom to make clear what it wants and needs for a Withdrawal Agreement to pass Parliament so that the EU is in no doubt as to what's required for a deal.

"The backstop remains the poison which makes any vote for the Withdrawal Agreement so toxic.

"The EU has shown in the past that it will move but only if faced with a resolute red line on the part of the UK Government.

"The coming days will show if this Government is made of the right stuff."

Since Mrs May pulled the vote Mr Dodds said the DUP had engaged with the UK Government in an attempt to move forward towards a deal which could command support in the House of Commons.

But he said: "So far, the fundamental problems which make this a bad deal appear not to have changed."