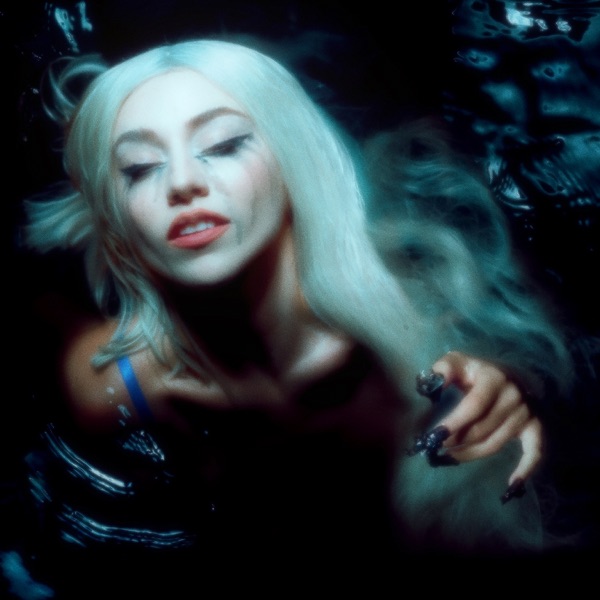 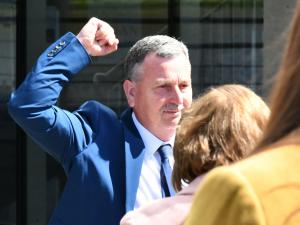 The Ballymurphy families have angrily rejected a letter of apology from Boris Johnson expressing his personal sorrow for the “terrible hurt that has been caused” by the deaths of 10 innocent civilians 50 years ago.

At an emotional press conference in Belfast on Thursday, relatives of those who died said the timing and the content of the letter was “disgraceful” and challenged the Prime Minister to come to the House of Commons and “speak to the world” about what happened in Ballymurphy.

On Tuesday, coroner Mrs Justice Keegan ruled that those who died in Belfast in August 1971 were “entirely innocent”.

She found that nine of the 10 had been killed by soldiers, and that the use of lethal force was not justified.

The letter from Boris Johnson was received by the families just before Northern Ireland Secretary Brandon Lewis told the House of Commons that the Government was “truly sorry” for the killings.

The letter stated: “I unequivocally accept the findings of the coroner.

“Those who died over that terrible period were innocent of any wrongdoing.

“The events at Ballymurphy should never have happened.

“You should never have had to experience such grief at the loss of your loved ones and such distress in your subsequent quest for truth.”

He continued: “The duty of the State is to hold itself to the highest standard and that requires us to recognise the hurt and agony caused when we fall short of those standards.

“For what happened on those terrible few days in Ballymurphy, and for what the families have gone through since you began your brave and dignified campaign almost five decades ago, I am truly sorry.

“I recognise that no words of apology can make up for the lasting pain that you have endured.

“Thank you for the dignity and strength you have shown.” 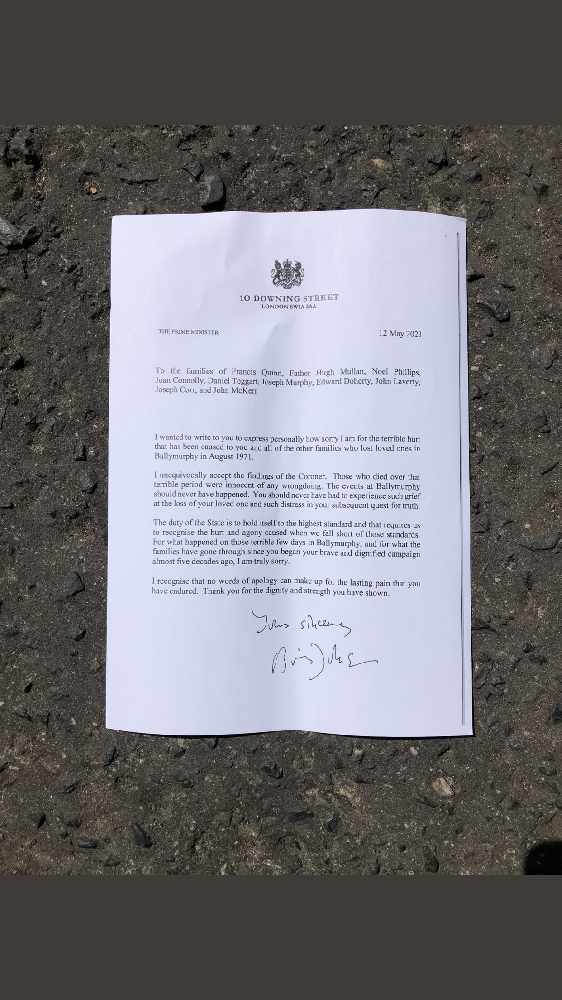 The families gathered together to reject the letter and repeat their call for a full investigation into the 10 deaths.

John Teggart, whose father Danny was shot by a soldier, said the main emotion from the families was anger.

“If this was to be done right he would have sat back, took his time, consulted with the families before he put that out.

“The manner in which he has done it is totally unacceptable to the families.”

He added: “Our loved ones were murdered by the State.

“The head of State (sic) is Boris Johnson so he should be standing at Parliament, speaking to us, speaking to the world, that is the way you do things.

“This Government has acted disgracefully.

“It should not have happened this way.

“It is really hurtful, it has caused pain and taken away our joyous moment of what happened on Tuesday.”

The Ballymurphy families have received a letter from the Prime Minister in which Boris Johnson expressed his personal sorrow for the “terrible hurt that has been caused” by the deaths of 10 innocent civilians 50 years ago. However the families say the PM has “ruined the moment” pic.twitter.com/zHNw7LnfXQ

The families’ solicitor, Padraig O Muirigh, broke down as he read out Mr Johnson’s letter.

He said: “It has been a very emotional few days for the families and this response has been disgraceful.

“These families have asked for justice.

“They have campaigned for 50 years, it has been a long journey.

“They now have a legal verdict which vindicates their loved ones’ innocence, they are entitled to pursue justice.

“They have truth, they now want justice.”

Briege Voyle, whose mother Joan Connolly was killed, said: “We were never allowed to call this a massacre, but it was a massacre.

“The Ballymurphy massacre families will fight to our dying day until we get justice.”

The families were split on whether they would meet now with the Prime Minister.

Mr Teggart said he would welcome such a meeting.

🎥Briege Voyle, daughter of Joan Connolly who was shot and killed in Ballymurphy said “we’ve been fighting this campaign now for 50 years and we were never allowed to call it a massacre”.

She says “we will fight until our dying days to make sure that the world knows now”. pic.twitter.com/aJTM9jE5Qg

But Janet Donnelly, whose father Joseph Murphy was shot, said: “He didn’t have the nerve to go in front of the House of Commons, he got Brandon Lewis to do it, why would we want to meet him?

“He didn’t apologise to us.

Carmel Quinn, whose brother John Laverty was killed, said: “I want to make it clear, this was a massacre which happened in Ballymurphy, and even the very idea that he would send a letter which called this an ‘event’.

“It wasn’t an event, it was mass murder.

“He thinks he can send a letter and then through the back door bring an amnesty in.

“We are determined, we want accountability and we want truth.

“It was mass murder carried out by the State.

“That letter is an absolute disgrace.”

The families then held a meeting with Sinn Fein President Mary-Lou McDonald.

Speaking after that meeting Ms McDonald said: “We have met with the families.

“They have articulated their very great anger with the botched way in which the British Prime Minister has approached the issue of an apology.

“An apology which is, frankly, the least that these families are entitled to, an apology that recognises the full truth and horror of what happened here in Ballymurphy over three days 50 years ago in 1971.

“These families are heroic, nothing short of that.

“They have shown a dignity, courage, resilience and stamina which is unmatched and I think Boris Johnson could do well to borrow from these families some of that dignity, some of that sense of purpose and he certainly needs to recognise what happened here.”

She added: “They have their truth now and I know that they are intent on receiving justice.”

In his statement in the Commons, Brandon Lewis said: “The findings of the coroner are clear, those who died were entirely innocent of wrongdoing.

“The events at Ballymurphy should never have happened.

“The families of those who were killed should never have had to experience the grief and trauma of that loss.

“They should have not had to wait almost five decades for judgment this week, nor been compelled to relive that terrible time in August 1971 again and again in their long and distressing quest for the truth.” 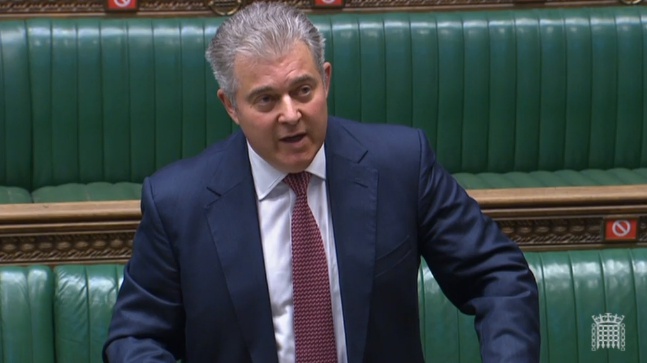 He added: “There is no doubt that what happened on those awful few days in Ballymurphy also fuelled further violence and escalation, particularly in the early years of the Troubles.

“The Government profoundly regrets and is truly sorry for these events and how investigations after these terrible events were handled, and for the additional pain that the families have had to endure in their fight to clear the names of their loved ones.”

He told MPs: “With each passing year the integrity of evidence and the prospect of prosecution do diminish, and the Government is not shrinking away from those challenges.

“We are determined to address them in a way that reflects the time that has passed, the complexity of Northern Ireland’s troubled history and the reality of compromises that have already been made.

“But above all we’re determined to address it in a way that enables victims and survivors to get to the truth which they deserve.

“We must never ignore or dismiss the past, learning what we can, we must find a way to move beyond it and the coroner’s findings this week are part of that very often painful process.

“This Government wants to deliver a way forward in addressing the legacy of the past in Northern Ireland, one that will allow all individuals of families who want information to seek and receive answers about what happened during the Troubles with far less delay and distress.

“We want a path forward which will also pave the way for wider societal reconciliation for all communities, allowing all the people of Northern Ireland to focus on building a shared, stable, peaceful and prosperous future.”