Foster: There is a difficulty delivering public health messages with O'Neill 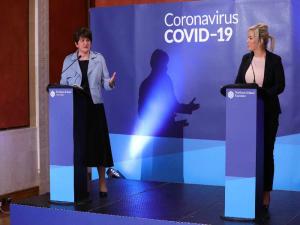 Arlene Foster has indicated she will not deliver joint public health messages with Michelle O'Neill until investigations into Bobby Storey's funeral conclude.

However, the First Minister said she would be prepared to make joint announcements alongside the Deputy First Minister on other executive issues, such as plans for the region's economic recovery.

On a visit to Ballymena, the DUP leader also said a date for reopening of indoor pools and spa facilities, and the remainder of pubs, should be taken at Thursday's executive meeting.

Mrs Foster said she would be willing to consider a proposal from health experts to make face coverings mandatory in shops in the region, but said she was not sure the issue would be tabled at Thursday's meeting of the powersharing administration.

The first and deputy first ministers held regular joint press conferences throughout the pandemic to update the public on the Covid-19 emergency.

Mrs Foster halted that practice in the aftermath of the controversy around the attendance of Ms O'Neill and other senior Sinn Fein figures at the funeral of the IRA veteran on June 30.

Ms O'Neill has denied claims she and her colleagues breached Stormont's coronavirus regulations and guidance on funerals and public gatherings by attending an event that saw hundreds line the streets of west Belfast.

The police are investigating the breach and rival politicians have also demanded an Assembly standards probe.

Mrs Foster was asked about the likelihood of a resumption of joint messaging with her Sinn Fein counterpart on a visit to Galgorm Spa and Golf Resort on Monday morning.

"I think it's difficult around the public health message because there are investigations ongoing both by the police and indeed in the Assembly in relation to whether regulations and guidance were breached," she said.

"Setting aside that, in terms of public announcements we still have a lot of work to do in terms of economic recovery, in terms of societal recovery, we have a mental health subcommittee coming up as well, so we'll continue to do the work that we need to do for all of the people of Northern Ireland.

"But there is a difficulty and I think everybody has acknowledged that around public health messaging."

The DUP leader added: "I think it's important that we continue to do the work. That's what we're continuing to do.

"We will, of course, not have as many executives (meetings) over the summer months, but it's important that we continue to get the message out and that the investigations are allowed to have their space to take place."

On her visit, Mrs Foster toured a £2 million redevelopment of the resort's Thermal Village and Spa.

It came amid calls from hospitality representatives for the executive to give the go-ahead for hotels to reopen their pool and spa facilities.

The First Minister said she expected a "definitive timescale" would be agreed by ministers on Thursday.

She was also asked about her position on face coverings in shops.

"Of course, if the chief medical officer brings a paper which has medical evidence behind it, then of course, we will look at that," said Mrs Foster.

"I think it's wrong to prejudge what the paper is going to say and, as yet, I'm not entirely clear that we will have a paper for Thursday in relation to this.

"But I think what is important is that we continue to act together, we continue to give clear messaging to our people, and that we take this step-by-step process which allows places like this (Galgorm) to be open in a safe and secure way and that's what I want to be able to do."