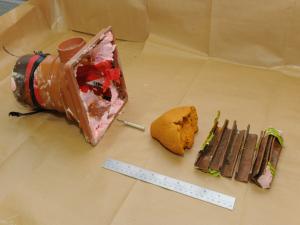 Four men have been remanded in custody charged with dissident republican terrorist offences after police seized an improvised explosive device in Northern Ireland.

Luke O'Neill, 22, from Silverwood Green in Lurgan, Co Armagh, is accused of attempting to murder police officers between August 30 and September 2 this year as well as possession of explosives with intent to endanger life.

Damien Duffy, 46, from Westclare Court in Dungannon, Co Tyrone, Ciaran Magee, 24, from Lake Street in Lurgan, Co Armagh, and Shea Reynolds, 22, from Kilwilke Road, also in Lurgan, are charged with preparation of terrorist acts, namely targeting a former member of the security forces.

All four appeared in the dock at Craigavon Magistrates' Court wearing tracksuits. They refused to stand before District Judge Peter King as details of the charges were put to them.

The men were arrested last week after a large-scale security operation during which police recovered a fully-prepared, explosively-formed projectile that was ready for deployment.

A detective sergeant from the Police Service of Northern Ireland (PSNI) said he believed he could connect all four men to the charges.

The court was told that a camera had been placed in a house overlooking the home of a former member of the security forces.

It was alleged that Reynolds' fingerprint was found on the camera and that his picture was also on an SD card.

However, police do not know the whereabouts of the camera now, the court heard.

He also said the defendant may abscond in order to avoid a lengthy jail term, if convicted.

Defence barrister Peter Corrigan challenged the objections and said his client was a man of good character who had never before been arrested or interviewed by police. He said the 22-year-old had a five-year-old child and his partner was due to give birth shortly.

He had a good job and strong ties to the local community, the lawyer said.

There were also issues about the strength of the evidence, he added.

Mr Corrigan said declining bail would be like "driving a coach and horses through the presumption of innocence".

However, District Judge King told the court he was concerned about the risk of interfering with witnesses and the ongoing investigation and remanded Reynolds into custody.

A bail application for Magee is expected to be made next week, the court was told.

No bail applications were made on behalf of O'Neill or Duffy, who is a brother of prominent republican Colin Duffy.

There was standing room only in the small courtroom, which was packed with dozens members and friends of the accused, some of whom wept as they were led into the dock in handcuffs.

Ahead of the hearing, District Judge King warned supporters he would clear the court if there were any disruptions.

At one point there was loud laughter when it emerged that the prosecution had been provided with the wrong record for Reynolds, whose record is clear.

As they were led to the dock, a number of the defendants gave the thumbs-up to supporters.

Throughout the hearing they spoke to and joked with each other and gestured towards others in the public gallery.

There was also a significant police presence, with riot squad officers both inside and outside the court.

There was loud applause, cheering and chants of "Keep 'er lit" as the men were led out of the dock.

As they were driven away in a police van, there was more cheering, whistling and applause from the large crowd.

The case has been adjourned, with Magee next due to appear on October 7, and Reynolds, O'Neill and Duffy to appear via video-link on October 21.