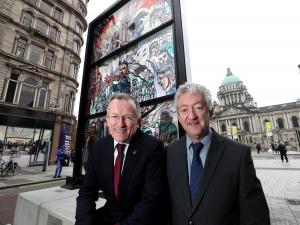 A giant stained glass window has been unveiled in Belfast to mark the start of the final season of Game Of Thrones.

The unveiling opposite the main entrance to Belfast City Hall came just hours after UK superfans stayed up until 2am to watch the first of the six final episodes.

The window is the first of six that will be unveiled each week across Belfast as the new episodes are shown on the small screen.

Each window will highlight a key House from the show, with a series of panels depicting the most talked-about moments from the entire saga.

The first window, unveiled on Monday, is dedicated to the House Stark.

Tourism Ireland has unveiled a new Game of Thrones themed stained glass window across from Belfast City Hall, to coincide with the eighth and final season of the TV show which was partly filmed in NI. The first episode premiered last night. @TourismNIreland @TourismIreland pic.twitter.com/FyzAZMAPrV

Each window will be large enough for fans to pose in front of, for photos and selfies, so they can recreate their own Game Of Thrones photo opp.

The stained glass panes have been designed by hand illustrators and are being stained by an artist in Bangor, Co Down.

By the end of series eight, the windows will form a new Game Of Thrones trail, leading fans across the city to the final window at the Titanic Studios, where much of the show has been produced.

The Glass Of Thrones installation is part of Tourism Ireland's new campaign to showcase Northern Ireland as Game Of Thrones territory to millions of fans worldwide.

The HBO fantasy epic has been filmed on locations across Northern Ireland over the last 10 years, and watched by millions of fans across the world.

Niall Gibbons, CEO of Tourism Ireland, said the aim of the campaign was to highlight Northern Ireland to audiences across the world.

"We are delighted to continue our partnership with HBO once again in 2019, to highlight Northern Ireland - through the exciting events of Game Of Thrones - on the global stage," he said.

"We're reminding people everywhere that Northern Ireland is Game Of Thrones territory and encouraging them to come and explore it for themselves."

Niall Gibbon, CEO of @TourismIreland has been speaking to Q Radio, after unveiling a giant stained glass window in Belfast, to mark the start of the final season of Game of Thrones: pic.twitter.com/7ePj4XbrGY

John McGrillen, CEO of Tourism NI, said Game Of Thrones has been "transformative" for tourism in the region.

"For 10 years, Northern Ireland's spectacular landscapes, dramatic coastlines, foreboding mountains and ageless forests have formed the perfect backdrop for the fantasy world of Game Of Thrones, making Game Of Thrones now truly part of our culture," he said.

"The new stained glass installations will give visitors yet another way to explore the Game Of Thrones story in Northern Ireland and to delve deeper into Northern Ireland's rich heritage."

The eighth and final season of Game of Thrones was shown at 2am on Monday on Sky Atlantic and NOW TV - and will be repeated at 9pm.