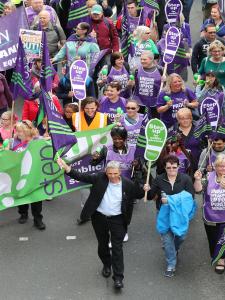 Protests were held at Antrim Area Hospital, the City Hospital and the Ulster Hospital among others.

Joe McCusker, Unison regional organiser, said they had received a lot of support.

He said: "We are saddened by the fact that the Department of Health and employers are not doing enough for them, but they are determined in their campaign for pay justice to be paid the same as anyone else in the UK."

He said the action was taken over pay parity with the rest of the UK, since workers are paid less in Northern Ireland.

He added: "Our workers are seeking pay justice, to be paid the same as their colleagues."

The first phase of industrial action will run from November 25 to December 18. The second will run to March 2020.

ICTU assistant general secretary Owen Reidy said: "They are saying they have had enough.