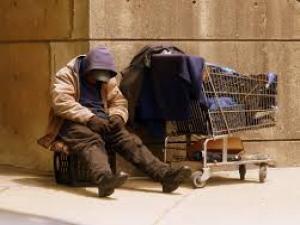 A new nursing campaign has been launched to tackle their plight.

She said: "Homelessness is one of the biggest scourges of our time and I have made tackling it one of my key priorities for the Nursing Now Campaign.

The Nursing Now campaign will also focus on the future role of nurses and midwives, men in nursing, early intervention, and transforming education for nurses.

It is a three-year global awareness drive run in collaboration with the International Council of Nurses and the World Health Organisation.

Professor McArdle said: "To ensure a bright future for this region, we also have to act on the damning statistics of childhood obesity, mental ill health and to address drug and alcohol problems.

"Nursing will be at the forefront of action in all these vital areas."

In the least deprived part of Northern Ireland, men live 6.6 years longer than their counterparts in the most deprived areas. For women this figure is 4.5 years.

Jim Dennison, chief executive of the Simon Community, Northern Ireland's largest homelessness charity, said that in 2018, 36,198 households were on the Housing Executive's waiting list for social housing, with over 24,000 considered to be in housing stress.

Across Northern Ireland, it is estimated that there are between 76,000 and 136,000 adults who can be considered as "hidden homeless", and around 370,000 individuals living in poverty.

Mr Dennison added: "Homeless people face many difficulties with ill-health, can be more vulnerable and at risk of early death and we would be supportive of any initiative that helps give homeless people better access to healthcare or removes any barriers they might face."