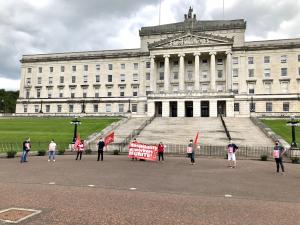 The demonstration organised by the Unite union also highlighted an alleged failure by Stormont to engage with workers while developing its post-lockdown economic recovery plans for the region.

Unite representative Neil Moore said research commissioned by the union indicated that between 10,000 to 15,000 hospitality workers face the threat of redundancy in the coming weeks.

"What we are seeing is a knee-jerk reaction to offload staff before the end of July which is obviously in line with the end of the job retention scheme in October," he said.

"We believe there are companies that are using that to pay the full 12 weeks statutory notice.

"We believe that's not right and that's not moral that companies are using a job retention scheme funded by the taxpayers in order to offload staff and restructure in this industry."

s over a threat to the livelihoods of thousands of workers in the hospitality and tourism sectors. #unitetheunion #hospitalityulster pic.twitter.com/dTGLyyu3rK

Mr Moore acknowledged that the tourism and hospitality sectors had been hit hard by the pandemic.

"That's why we need the politicians to step in to fund and save our tourism sector but that cannot be at the cost of workers' jobs and skills," he said.

He raised concern at a lack of union representation on a tourism recovery steering group at Stormont.

Mr Moore claimed that employers' considerations were being taken into account by Stormont decision-makers while workers' views were being ignored. 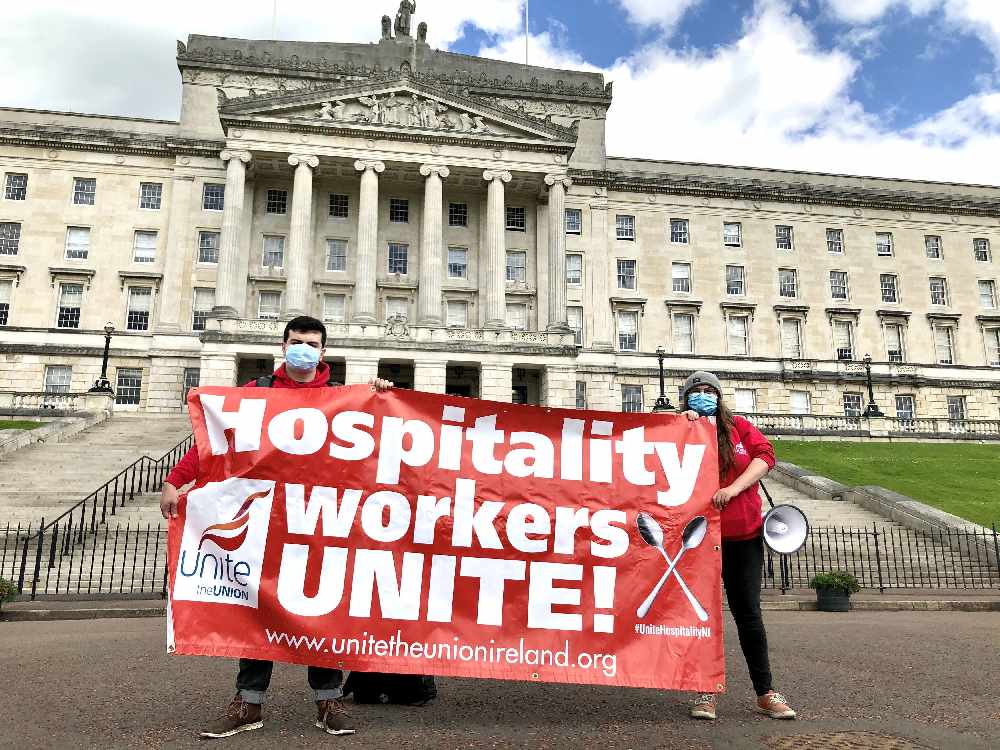 “Growing numbers of hospitality workers are asking themselves whether they want to stay in this industry – there’s a real concern for the future. Our survey of over 400 hospitality workers currently under threat of redundancy shows that 71% will not return to work in the sector if made redundant. This has serious implications for tourism and the economy as a whole.

“We are organising a socially-distanced protest outside Stormont Parliament Buildings today [July 21st at 1pm] where hospitality and tourism workers will be joined by private and public sector workers who are there to show their solidarity.

Whether you work in a factory or a hospital – you like to go out for a meal and enjoy yourself – hospitality workers are key to that. Other workers who are starting to go out and socialise again are asking us which bars and pubs have been decent to workers throughout this, they want to know where to avoid.

“Following our protest, we will present Minister Dodds with a letter demanding a meeting to discuss our concerns. Hospitality workers deserve to have their voices heard”, Mr Moore concluded.