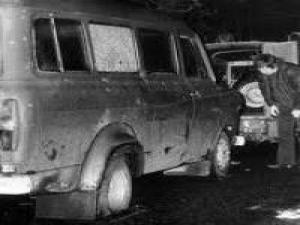 A mother whose son was murdered in the Kingsmill massacre was told by an Army officer that the military was ordered not to go on patrol on the day of the killings, an inquest has heard.

Esther McConville, whose son John was one of 10 Protestant workmen gunned down in Co Armagh 41 years ago, received the information a few years after his death from an officer at Bessbrook army barracks where she worked in the kitchen, a lawyer for the family said.

However, a former soldier who was based at Bessbrook, in South Armagh, at the time of the atrocity strenuously denied the claim at Belfast Coroner's Court.

The court also heard that the first person to come across the scene of the massacre has never been interviewed by police.

Charles Hughes was taking building supplies from Newry to Crossmaglen with his brother-in-law when he saw the victims' red van standing stationary at around 5.30pm on January 5 1976.

In a statement to the court Mr Hughes, who was excused from giving evidence in person due to ill health, said he originally thought there had been an accident.

He described the carnage he witnessed as he made his way towards the mini van.

"It was surrounded by dead bodies. There was no noise at all. Gerry (his brother-in-law) drove to the first farmhouse... to phone for the emergency services.

"I was alone with the bodies for what seemed like an eternity. It was probably only 15 minutes."

He said he and his brother-in-law stayed at the scene until 8.30pm to assist the emergency services.

Before he left he gave his contact details to police expecting to be contacted to give a statement.

However he added that "each time an arrangement was made to give a statement (police) never turned up".

The men were shot dead on January 5 1976 after IRA gunmen stopped their van and asked which among them was a Catholic, and instructed that man to leave the scene.

The inquest into the killings resumed last week after being adjourned in 2016 due to a police investigation.

A lawyer for the victims' families raised claims on Tuesday from the McConville family that the Army had been told not to go out on patrol on the day of the mass attack.

However, giving evidence from behind a screen a former officer with the 1st Battalion Ulster Scots, who was in charge of military operations in South Armagh in 1976, insisted: "I can categorically say this is not the case."

Referred to as MOD 2 he added: "It makes no sense. Perhaps the information was misunderstood. The Army did not tolerate no-go areas."

He said that prior to the massacre there had been a build-up of tit-for-tat killings, including a bombing in Camlough and the shootings of three brothers, John Martin, Brian and Anthony Reavey in Whitecross.

"To me it was a very intense period. We deployed as many soldiers as we could on the ground based on intellectual evidence as to where attacks might occur."

He added: "I am not aware of any areas out of bounds."

The inquest was told that the MOD will next week address questions over the whereabouts of Captain Robert Nairac at the time of the massacre.

There has been speculation that the undercover Army officer - who was abducted and murdered by the IRA in 1977 - was involved in the atrocity.

MOD 2 said that prior to attending the inquest he checked with the intelligence officer at the time if Captain Nairac had been in Northern Ireland in January 1976.

"He confirmed he had never come to Bessbrook. He was not in the province at that time. He did not come until May or June (1976)," he said.

A lawyer for the Coroner's office said a witness will give evidence next week in relation to Captain Nairac's movements at the time.