Loyalist's murder in front of son "barbaric and reckless" 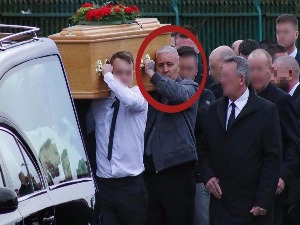 The murder of a loyalist in a busy supermarket car park as his three-year-old son looked on was a barbaric and reckless act, a senior detective has said.

Colin Horner, 35, was gunned down by a lone gunman among crowds of shoppers outside the Sainsbury's superstore on the outskirts of Bangor, Co Down on Sunday afternoon.

It is understood Mr Horner, from Carrickfergus, Co Antrim, recently relocated to Bangor amid fears he would be targeted in the same loyalist paramilitary feud that claimed the life of his friend George Gilmore two months ago.

Loyalist Mr Gilmore, 44, was shot dead in Carrickfergus in March.

Police Service of Northern Ireland (PSNI) Detective Superintendent Richard Campbell confirmed a link between Mr Horner's murder and the long-running Carrick feud between rival loyalists was one line of inquiry.

He said officers were trawling through CCTV footage from the store car park in a bid to catch the killer.

The detective said the victim had just strapped his son into the back seat of his black Nissan Pulsar car, reg XFZ 4706, at 2.45pm when a lone gunman approached and fired at least three shots from a handgun.

"His three-year-old son was in the car and was immediately beside his father when he was shot dead in front of him," he said.

"So it's a hugely barbaric act and something that will undoubtedly live with this young boy for the rest of his life."

Confirming Mr Horner was known to police, Mr Campbell said he left the home he shared with his partner on the Rathgael Road in Bangor at around 1.30pm.

He said detectives were trying to establish what he had been doing in the hour between then and arriving at the supermarket at 2.30pm.

Officers believe the gunman, who was wearing a dark hoody and some sort of mask, escaped in a red Ford Mondeo driven by an accomplice. The car was displaying false plates - reg GKZ 7996.

This vehicle was later found burned out in the Kerrs Road area between Bangor and Newtownards.

Mr Campell appealed for information about the movements of the Pulsar and Mondeo on Sunday afternoon and urged witnesses in the car park to come forward. He said vital clues could have been captured on mobile phone videos or dash-cams.

"This was a completely reckless act in a public car park in Bangor on a bank holiday weekend, there were a large number of people in this car park," he said, revealing that one stray bullet struck another shopper's car.

"There was a huge degree of recklessness shown by the people who did this."