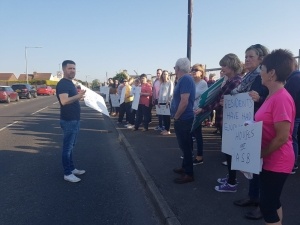 Residents have gathered in Lurgan to protest at high levels of anti social behaviour.

Around 100 locals took part in a rally outside an old rundown factory site on Lake Street on Monday night.

It's claimed young people have been under age drinking and abusing drugs in the Clendinnings area for some time.

Councillor Keith Haughian wants the land owner to build social housing in a bid to resolve the issue.

He said: "There's been a long running campaign where we want the investor to put in social housing.

"Really we were hitting a bit of a brick wall so we went about trying to empower local people, who were complaining about the lack of social housing.

"I think he (the land owner) under estimates the problems. At one of the previous meetings he actually claimed he had never set foot on this land.

"We're going to start a petition, and meet with the council in recent weeks to look at some kind of enforcement if no action is taken."