Man arrested after thousands of tablets discovered in east Belfast 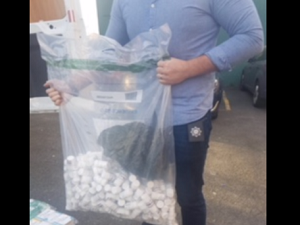 The tablets were found at a house in east Belfast

A 33-year-old man has been arrested after police discovered thousands of suspected Diazepam tablets at a house in east Belfast.

Police were searching the property at Kilbroney House, Greenway, on Saturday when they found the tablets along with a small quantity of herbal cannabis and two mobile phones.

The search followed the interception of a parcel destined for the same address, which contained thousands of suspected Pregabalin tablets.

The man was arrested on suspicion of importation of a class C drug and attempted possession with intent to supply a class C controlled drug. He was released on bail pending further inquiries.

A police spokesman said: "Tackling the illegal supply and use of drugs continues to be a priority for police and seizures such as this demonstrate the ongoing commitment to removing illegal drugs from society.

"Police would encourage anyone who has any information about the use or supply of illegal drugs to contact police on the non-emergency number 101 with any information they have.