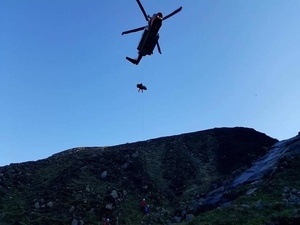 The walker was airlifted to Royal Victoria Hospital, Belfast.

A walker has been airlifted from a section of the Mourne Mountains following a fall of almost 50 Metres.

Rescue teams were called to the "water slabs" in the Annalong Valley yesterday afternoon near Slieve Binnian.

The casualty was airlifted to Hospital in Belfast for treatment to head, neck and chest injuries.

They were alerted to the distressed man at around 16.30, but due the location and severity of his injuries, remained on site until after 21.00.

Rescue 116 Helicopter was tasked from Dublin and assisted local paramedics and mountain rescue teams in the operation.