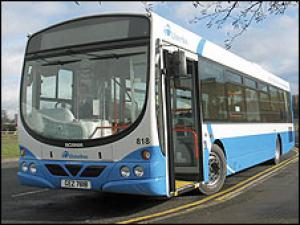 A Belfast man was remanded into custody today (mon) charged with hijacking a bus.

As well as being charged with seizing control of the bus using “force or threats” on 19 January this year, 33-year-old Jonathan McFarland was also accused of possessing a weapon, namely a knife, with intent to commit hijacking, aggravated vehicle theft causing damage, driving whilst unfit “through drink or drugs,” driving while banned, driving on Culross Avenue without insurance and the theft of a cash dispenser which contained “an unknown amount” of money.

Standing handcuffed to a prison officer at Downpatrick Magistrates Court McFarland, with an address at a hostel on Victoria Street in Belfast, nodded to confirm that he understood the charges against him while a Detective constable said she believed she could connect him to the offences.

Nothing of the surrounding facts were opened in court today (mon) but it is understood they relate to an incident on Saturday evening in the Ballybeen area if east Belfast when a bus driver was allegedly threatened with a knife.

Under cross examination from defence solicitor Rod Taylor, the detective confirmed that McFarland had “cooperated fully with police enquiries,” adding that he was not applying for bail.

Remanding McFarland into custody, District Judge Amanda Brady ordered him to appear at Newtownards Magistrates Court via videolink on 15 February.