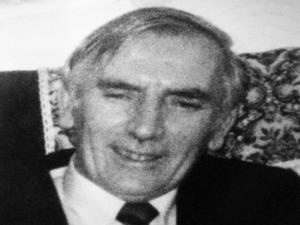 A man has appeared in court in Co Down accused of the murder of a postman in 1994.

Frank Kerr was fatally injured when armed robbers carried out a raid at a sorting office in Newry on November 10 of that year.

The Provisional IRA was blamed for the attack at the time.

Appearing at Newry Magistrates' Court on Friday morning, James Seamus Fox, 60, of Carewamean Road, Jonesborough, was also charged with the theft of £131,000, possession of a firearm and membership of a proscribed organisation in 1994, namely the IRA.

Fox answered yes when asked whether he understood the charges.

A detective inspector told the court that Fox had voluntarily presented himself to police, however he had remained silent during questioning.

He said he believed he could connect the accused with the charges, and also opposed Fox's bail application, claiming there was a risk of flight and potential of interference with witnesses.

Outlining the background of the case, the detective said Mr Kerr had challenged a number of gunmen, some of whom were dressed as postal workers, who entered the sorting office.

He told the court that a scuffle ensued and three shots were fired, one of which struck Mr Kerr in the neck, fatally injuring him.

The court heard there was DNA evidence linking Fox with a postal worker's uniform items which were connected with the incident.

That clothing was recovered from a car stopped by police a short time after the attack.

The detective added that Fox had been a suspect at the time of the murder, but that police had been "fraught with difficulties" as he was then residing in the Republic of Ireland.

A lawyer acting for Fox told the court his client had presented himself to police for questioning, adding that he had known since April the case had been due to happen, and had not made any attempt to leave the jurisdiction.

He described Fox as a "well known supporter" of the peace process, someone who was involved with his local GAA club and had been involved in supporting police through the District Policing Partnership.

District Judge Eamon King granted bail with a number of conditions, including residing at the address given in court and reporting to his closest police station three times a week.

However the prosecution said it intended to appeal against the decision of the court at Belfast High Court.

Fox's case will next be mentioned at Newry Magistrates' Court on September 4.

Sinn Fein Newry and Mourne MP Micky Brady and MLA Megan Fearon were among supporters present in court for the brief hearing.