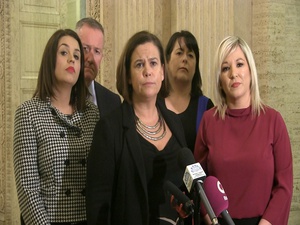 Mary Lou McDonald has rejected claims of Sinn Fein secrecy as she defended not publicising details of the vote that saw Michelle O'Neill re-elected vice-president.

In a rare contest for a Sinn Fein leadership role, Ms O'Neill saw off the challenge of former Stormont minister John O'Dowd at the weekend.

The outcome was announced on Saturday at the party's Ard Fheis in Londonderry but the breakdown of the vote among party members was not, prompting accusations of a lack of transparency.

"There's absolutely no secrecy, there's no secrecy around anything," said Ms McDonald on Thursday.

"Sinn Fein, unlike other political parties, elect our leadership, I'm sure you are aware that other deputy leaders are simply appointed by the leader in question.

"We've had our Ard Fheis and the delegates have had their say and here we are."

Ms McDonald joined Ms O'Neill and other senior party figures at Stormont on Thursday for a meeting with Northern Ireland Secretary Julian Smith to discuss the powersharing impasse.

Afterwards, the party president, flanked by Ms O'Neill, insisted the vote in Derry was in line with party procedures.

"This is an internal appointment, we do it by way of a process within the party where delegates come to the Ard Fheis and they cast their vote.

"We do that every year. Last year we had a contest for the position of general secretary and that's how it is and it's not the practice to publish figures.

"The result is known, you all know the result, the process is an internal one and it's now concluded."