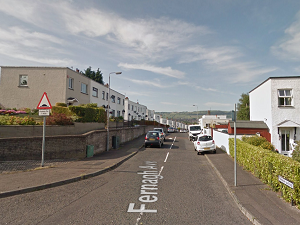 It happened on Fernagh Avenue in Newtownabbey

A paint-bomb attack on a house in Newtownabbey is being treated as a racially-motivated hate crime.

A window of the house on Fernagh Avenue was also smashed in the incident just after midnight.

The four adults and young boy inside the property were not injured.

“At around 00:25am, it was reported that a number of paint bombs were thrown at the front of a house in the area with one smashing the front window. "

“It was reported two men and two women all in their 20s and a young boy were inside the property during the incident, with thankfully no injuries reported."

“Enquiries are continuing and at this stage the incident is being treated as a racially motivated hate crime."

“We would appeal to anyone with any information to contact police in Newtownabbey on 101, quoting reference number 32 24/11/19. Alternatively, information can also be provided to the independent charity Crimestoppers on 0800 555 111 which is 100% anonymous and gives people the power to speak up and stop crime.”