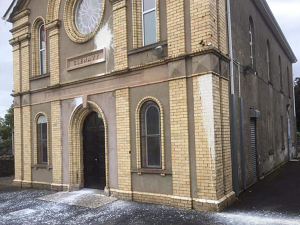 Jars of white paint have been thrown at an Orange Hall in Glenavy in Co Antrim.

Police are treating the incident as a sectarian hate crime.

The criminal damage was reported to police at about 10am on Monday, and happened overnight.

Superintendent Davy Beck said: "I have spoken to a number of community representatives in the area and what is clear to me is that no-one wants to see this type of activity in Glenavy.

"If you were in the area and noticed anything suspicious or you noticed anyone in the area of the hall or indeed if you were passing through the village and you have any dash-cam footage, my officers would be keen to speak with you."

"It was a despicable thing to do and is designed to try and stir up division.

"It is especially discouraging given how the 12th parade through the village passed off peacefully and harmoniously."

Sinn Fein assembly member Declan Kearney said it was a hate crime, an act of criminality and clearly aimed at provoking sectarian tensions.

"Those responsible have no positive contribution to make towards promoting mutual respect or enhancing community relations in South Antrim.

"I condemn these actions unreservedly and call on the local community to stand together against any attempts to foment community divisions in Glenavy."