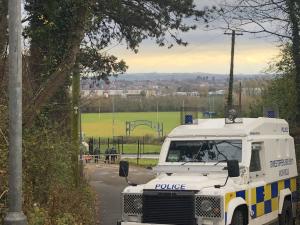 Police believe a suspected grenade attack on a PSNI vehicle in west Belfast overnight was an attempt to kill or seriously injure officers.

It happened in the Milltown Row area off the Falls Road at around 2am.

No-one was injured during the incident and the police land rover has not been damaged.

The vehicle was driven to a place of safety following the attack.

Police have been carrying out searches in the area today to ensure no other devices remain, which could pose a risk.

Police are in the Milltown Row area of west Belfast where a suspected grenade was thrown at a PSNI vehicle on patrol overnight. Searches are currently being carried out in the area. pic.twitter.com/azmjTLda97

Chief Superintendent Jonathan Roberts said officers were in the area conducting routine patrols at the time.

"A loud bang was then heard and the Land Rover made its way to a place of safety. Thankfully none of the officers inside the vehicle were injured and no damage was noted to the vehicle," he added.

“A police operation was immediately implemented to ensure the safety of everyone in the area and that operation is ongoing at present.

"The remnants of a suspected grenade have been recovered and taken away for forensic testing. Further searches are being conducted this morning to ensure there are no other devices present which could endanger members of the public.

“This was a undoubtedly an attempt to kill or injure police officers who were out on duty in the early hours of the morning working to keep the public safe.

"This despicable act must be condemned by all."

Meanwhile, the incident was causing some disruption for local residents living close to the Milltown Row area.

Q Radio spoke to one man who is a bus driver and works closely with the Education Authority.

He heard a bang during the night and when he went to check, officers were fleeing the scene.

The resident said he was unable to gain access to his vehicles for most of this morning and afternoon, as they are located at the bottom of the land which police had cordoned off for searches.

West Belfast MLA Pat Sheehan has hit out at those responsible for the attack and says there is no place for them in the local community.

🎥 Police say a suspected grenade attack on police in west Belfast overnight was an attempt to kill or seriously injure officers. @PatSheehanMLA has hit out at those responsible and says there’s no need for violence on our streets. He says the incident is disrupting residents. pic.twitter.com/lA8fTnhDaS

Mark Lindsay, chairman of the Police Federation for Northern Ireland, said the officers inside the vehicle had been lucky to escape without injury in what he described as a "callous attempt to kill them".

"The officers patrolling in their vehicle in Milltown Row were fortunate to escape unscathed after their vehicle was struck by a suspected grenade," he said.

"Instead of reporting a failed terrorist attack this morning, we could easily have been commenting on fatalities or serious injuries. I am relieved that our officers weren't hurt in this cowardly and callous attempt to kill them.

"As a community, we have to rid ourselves of this terrorist menace. It is holding back all of us who want to build a better future for our children.

"These dissident republicans are heartless and ruthless. We have a threat level that is officially rated 'severe' and there's little prospect of that changing in the foreseeable future.

"There is a full investigation under way and I would ask the community for its help to track down the people responsible for this murderous attack."