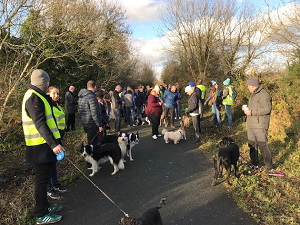 The 'Enough is Enough' event was hosted by the Comber Greenway Campaign.

Dozens of people have gathered in East Belfast to protest against dog poisonings on the Comber Greenway.

🎥Protest taking place against dog poisoning on Comber Greenway. Mark & Michelle Maguire’s beloved pet Lilly passed away last week following the latest in a string of attacks. Maguires: “Be vigilant - we don’t want that to happen to anyone else’s dog” ... Report on air at 3pm. pic.twitter.com/uNS15nZ79o

It's the latest in a string of attacks there with six animals taking ill last year after consuming food laced with anti-freeze.

The 'Enough is Enough' event was hosted by the Comber Greenway Campaign.

A spokesperson for the group said, "We are holding a walk of solidarity, a walk to show those that are behind brutal dog poisonings that we are standing strong against such sickening acts".

" We must and will stand strong against such evil attacks on our pets, wildlife, and community'