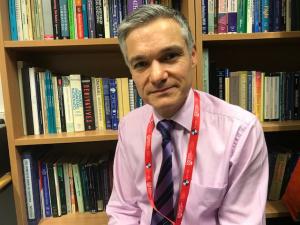 Queen’s University Belfast researchers are preparing for winter and have developed a new system to prevent ice from building up on aircraft.

When a plane travels through clouds in cold weather, layers of ice can form on its wings, propellers or jet intakes. This can increase drag and reduce lift, which may lead to loss of control of the aircraft. A number of fatal aircraft accidents have been attributed to the build-up of ice over wing surfaces.

The conventional anti-icing system on most passenger aircraft is based on hot air which is ‘bled’ from the engines and piped to the inner surface of the wing. The heat is then transferred to the outer surface by thermal conduction, which stops the ice from building. This system adds weight and maintenance requirements, and is not energy efficient, particularly on the new generation of composite aircraft.

A team of experts at Queen’s have developed a more efficient alternative – an ultra-light weight heater, based on ‘webs’ made from carbon nanotubes (CNT) - which can also be used for de-icing.

Professor Brian Falzon, from the School of Mechanical and Aerospace Engineering led the Queen’s team to the discovery and the research has been published in the journal Carbon.

He explains: “This research is funded by the Engineering and Physical Sciences Research Council (EPSRC) and forms part of a larger research programme aimed at developing the aircraft structures of tomorrow. We started by creating a ‘CNT web’, where individual CNTs are aligned in the draw direction, and horizontally stacking 10-40 layers of the webs, at different orientations, to achieve the desired heating characteristics.

“Each layer of CNT web can be as thin as 1/2000 the thickness of a human hair and the weight of a web large enough to cover a football field would be less than 30 sheets of A4 photocopy paper.

“These CNT webs were cured within a thin glass fibre laminate to provide structural support, and connected to a power supply.”

High-flying @QUBelfast researchers have developed a new system to prevent ice from building up on aircraft...More https://t.co/boX2EdCtC7 & ON AIR at 2! pic.twitter.com/M3tzq4Vvyo

Professor Falzon continues: “When we carried out testing, we discovered that the newly developed CNT heaters achieved rapid heating which shows that the CNT heaters could quickly de-ice aircraft and provide effective ice protection in flight.”

Dr Xudan Yao, a PhD student from China, worked on the project under the supervision of Professor Falzon and Professor Stephen Hawkins. She said: “Compared with state-of-the-art heating systems currently used on aircraft, the CNT heater that we have created at Queen’s is lighter, provides rapid and more uniform heating and is more energy efficient. It is also more flexible in terms of fitting the shape and performance of any surface or power requirement to achieve rapid anti-icing and de-icing.

“It has been fascinating to be involved in this project. We have managed as a team to come up with a light-weight and efficient alternative, which could mean that aircraft can now be protected from ice more effectively.”

The team is developing further research on the system and it is hoped that it will be in use within a few years.