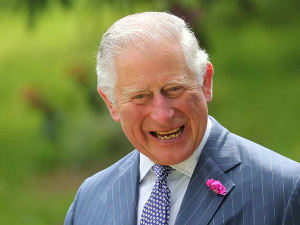 Prince Charles and the Duchess of Cornwall have arrived at Castle Coole in Co Fermanagh on the second day of their visit to the island of Ireland.

The Royal couple are attending Secretary of State Karen Bradley's annual garden party which is taking place at the National Trust property.

Among the 1,000 guests attending are PSNI Chief Constable George Hamilton, representatives from local councils in both Northern Ireland and the Republic of Ireland and members of cross-border bodies.

DUP leader Arlene Foster is among the guests who welcomed Prince Charles and the Duchess of Cornwall to the garden party at the castle in her home county Fermanagh.

They gathered outside Castle Coole on the outskirts of Enniskillen with a banner which urged redress for child victims of clerical abuse in residential homes.

The demonstrators have been angered by delays to compensation which was recommended following a public inquiry more than two years ago, but not acted on due to the collapse of political powersharing.

Some of the group had met Ms Bradley on Monday at Stormont for talks on the issue, including Kate Walmsley, who says she was subjected to abuse at a home run by the Sisters of Nazareth nuns in Londonderry.

After being turned away by a polite police officer at the gates, Ms Walmsley said: "I am just annoyed with Karen Bradley that she has given out the wrong signals, she is giving a signal to the world that it is okay to sexually abuse children because nobody does nothing about it.

"You won't get justice anyway so don't bother and I think it is very sad that she would do that."

She described her plans for any compensation, saying she would buy a burial plot next to fellow protester Margaret McGuickin.

Ms McGuckin claimed the Northern Ireland Secretary had passed the buck for the delay in compensation and blamed the civil service.

"Many of our people are at death's door and so many have passed away.

"Thirty people have died in this past two-and-a-half years.

"We wished we had never started this, this is 11 years of campaigning, two-and-a-half years after the Hart Inquiry findings where we were vindicated.

It has all fell flat, nobody is getting anything, no support, we are all supporting each other and it is a disgrace on this Government that they are not doing anything."