Don't Get Me Wrong 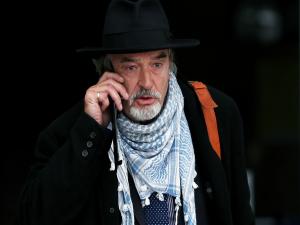 There is a strong public interest in having Ian Bailey, who is facing a 25-year prison sentence for the murder of filmmaker Sophie Toscan du Plantier, surrendered to France, a court has heard.

Mr Bailey is facing a third extradition process to France, in relation to the death of Ms Du Plantier whose badly beaten body was found outside her holiday home in Schull in December 1996.

Barrister for the State Robert Barron told the court: "We have before the court a European Arrest Warrant (EWA) issued by the French republic... Primae facie, there is an obligation to execute or surrender Mr Bailey to France."

He said: "There is a strong public interest in his surrender. Mr Bailey is a man who has been suspected of this killing for 24 years, he has been the subject of Garda (Irish Police) investigations, his suspected involvement has been considered by the Director of Public Prosecutions and was twice arrested for the purpose of the execution of the EWA."

Mr Justice Paul Burns reserved judgment and said he would deliver his decision on October 12.

He added there are difficult issues and a lot of topics to consider regarding different aspects of the law.

Mr Barron said these issues are "important, weighty considerations" to be taken into account by the judge.

He told the court that despite Mr Bailey's ongoing legal battles, Ireland has become a safe haven for him.

Mr Barron said: "Ireland has become a safe haven in a bizarre way for Mr Bailey because he can't travel outside Ireland to anywhere in the European Union at the risk of being arrested.

Mr Justice Paul Burns suggested to the court that Mr Bailey was worried that if he ever left his home in Ireland, he would risk being arrested again and having another legal case to add to his existing one.

Mr Barron said he had sympathy for Mr Bailey having to miss his mother's funeral in 2013 as he could not travel but questioned how this amounted to abuse of process as outlined by Mr Bailey's defence.

Ronan Munro told the High Court on Thursday that another attempt to extradite his client was an "abuse of process".

He said the court should put a "stop to this" and let Mr Bailey get on with his life and allow the gardai to get on with their job.

He told the court that there was "little consideration" given to the prejudicial effects and impact on Mr Bailey by the French authorities.

Summing up on Friday, Mr Munro said that Mr Barron had suggested referring this issue to Europe but he argued that issuing further proceedings after 23 years against Mr Bailey "would be verging on persecution".

He is wanted in France for the murder of Ms Toscan du Plantier in Schull, Co Cork, in December 1996.

Bailey, with an address at The Prairie in Schull, was convicted of murder in his absence by a court in Paris in May last year.

He had no legal representation for the case, did not attend the court and described it at the time as a farce.

He denies any involvement in the French woman's death.

Oscar-nominated film director Jim Sheridan attended each day of the hearing as he is making a documentary about Mr Bailey.