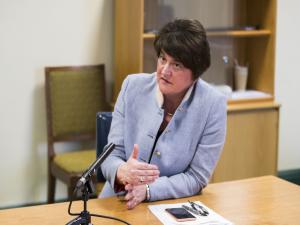 Arlene Foster has vowed to learn the lessons of Stormont's botched green energy scheme after a public inquiry identified a multiplicity of mistakes in its running.

The First Minister and Democratic Unionist leader insisted she would not be quitting in the wake of a critical report that said errors and omissions rather than political corruption were to blame for a scandal that collapsed powersharing in Northern Ireland.

But the probe, chaired by retired judge Sir Patrick Coghlin, said it would be wrong to blame specific individuals or groups for the design flaws that saw applicants "perversely incentivised" to burn excess heat to turn a profit.

He said responsibility should be shared among a wide range of people and public bodies.

Responding to the report, Mrs Foster apologised for her failings.

"Obviously there are issues when I look back that I wish had done differently," she told PA Media.

She said the report had provided a "roadmap" to try to rebuild public trust in government and politics in Northern Ireland.

Asked whether she would be considering her position, she replied: "No it doesn't make myself reflect.

"Obviously I look back at the mistakes that were made and wish things had happened in a different way but I think for me what I have to do now is learn the lessons, particularly around my piece and also around the whole governance piece as well, being the First Minister, to make sure that those are implemented."

The report was particularly critical of the Stormont department in charge of the scheme, the then-named department for enterprise, trade and investment (DETI).

"Corrupt or malicious activity on the part of officials, ministers or special advisers was not the cause of what went wrong with the NI RHI scheme, albeit the inquiry has identified some instances where behaviour was unacceptable," said Sir Patrick.

"Rather the vast majority of what went wrong was due to an accumulation an compounding of error and omissions over time and a failure of attention, on the part of all those involved in their differing roles to identify the existence, significance or implications of those errors and omissions."

He added: "Responsibility for what went wrong lay not just with one individual or group but with abroad range of persons and organisations involved, across a variety of areas relating to the design, approval, management and administration of the NI RHI scheme through its life."

The 656-page three volume report contains 319 findings and makes 44 recommendations aimed at addressing the litany of failures identified by the investigation.

Finance Minister Conor Murphy said a dedicated Executive sub-committee would now be established to act on the report's findings.

The RHI incentivised businesses and farmers to switch to eco-friendly boilers by paying them a subsidy for the wood pellet fuel required to run them.

But mistakes in its designs saw the subsidy rates set higher than the actual cost of the wood pellets - with applicants finding themselves able to burn to earn.

The controversy over the RHI led to the collapse of Stormont powersharing after the late Sinn Fein deputy first minister resigned in protest at Mrs Foster's handling of the affair in January 2017.

The RHI had left the administration facing an overspend bill of hundreds of millions of pounds. Subsequent cost-control steps have prevented that happening.

The report said it could give no guarantee the same mistakes will not be repeated.

The inquiry said the RHI scheme was a "project too far" for the Northern Ireland executive.

"While motivated by the laudable aim of encouraging the use of renewables rather than fossil fuels in heat production, the Northern Ireland stand-alone scheme should never have been adopted," said Sir Patrick.

The chairman rejected criticism of the publication date and time, on a Friday afternoon before the St Patrick's holiday weekend, and insisted it was not an attempt to bury bad news.

Mrs Foster was the DETI minister at the time the scheme was developed in 2012.

The inquiry found she had been incorrectly informed by her officials that the project was value for money.

However, it criticised her for signing off on a draft regulatory impact assessment which highlighted risk but did not include adequate costing information.

"While the minister should not have been presented with a document which lacked all the necessary cost information, she equally should not have signed it in those circumstances," said the inquiry chairman.

It criticised Dr Crawford for sharing confidential documents relating to the scheme to family members.

It criticised Mr Robinson for leaking emails relating to the involvement of civil servants in the scheme in order to "divert the attention of the media away from their party".

The inquiry noted that a plan had been also been discussed with one of Mrs Foster's successors as DETI minister, Simon Hamilton, and other party advisers.

The report said the scheme was "high risk". It said it was "novel, technically complex and potentially volatile" because of its "demand-led nature and wide range of variable".

"Yet the risks were not sufficiently understood by all those who should have understood them within the Northern Ireland government," said Sir Patrick.

It said the department should never have embarked on the scheme and criticised the decision to diverge from the model employed in Great Britain.

The inquiry found that independent consultants CEPA recommended a payment rate for some boilers that was higher than the cost of heat production.

It said that error, which was not picked up by DETI officials, created a "perverse incentive to produce excess heat", whether it was needed or not, in order to make a profit.

The inquiry panel said there had been insufficient steps to protect Northern Ireland's budget.

It found important DETI documents were "inaccurate, incomplete or misleading in important respects".

The report said the department also did not devote adequate resources to the scheme, staffing its operation with junior civil servants who lacked specialist skills in the area.

It said there was a lack of properly tailored management processes within the department and ineffective internal governance systems.

The inquiry also criticised a lack of basic record-keeping at DETI, highlighting that minutes were often not taken at meetings.

It also found that the department's Assembly scrutiny committee had been ineffective at holding it to account.

The inquiry noted that other public and private bodies quickly identified the flaws and lucrative incentive built into the scheme.

The inquiry said bodies such as Invest NI and Action Renewables should have done more to alert DETI but found no "conspiracy of silence", rather painted a picture of a "silo culture" between different parts of the public sector.

It said the Department of Agriculture, then led by Sinn Fein's current deputy first minister Michelle O'Neill, should have made DETI aware of "excessively generous" rewards for participants.

The report praised Janette O'Hagan, a whistle-blower working in the renewables sector, who flagged concerns and criticised how she was treated.

"The treatment fell well below the standard that she was entitled to expect," said Sir Patrick.

The report also found that Stormont's Department of Finance mishandled the process for granting approval for the scheme in 2014.

It said cost control measures implemented by then-DETI minister Jonathan Bell in 2015 made no impact because they were "ill-considered".

Despite the fact they ultimately did not work, the inquiry said a delay in implementing the measures during 2015 was "excessive".

The probe also criticised civil servants who shared information about imminent cost curbing steps to third parties before they were otherwise publicly announced.

In respect of ministerial special adviser, the inquiry found "repeated failures" to comply with the code governing their appointment.

It found that the relationship between energy regulator Ofgem and DETI was "unsatisfactory" and said the former had failed to pass important information to the latter.

The inquiry said the ultimate closure of the scheme in 2016 was not well managed.