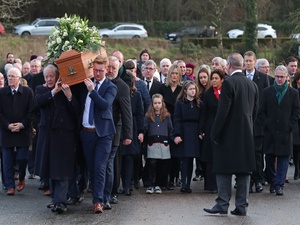 Seamus Mallon was a bridge-builder who dedicated himself to peacemaking, the head of the Catholic Church in Ireland has told mourners at his funeral.

Current SDLP leader Colum Eastwood and party colleagues helped carry his coffin into the small church as a local GAA club formed a guard of honour at the door.

Hundreds of mourners packed the church and the adjacent church hall, where the service was broadcast.

As Mr Mallon's daughter, Orla, watched on, Archbishop of Armagh Eamon Martin hailed his contribution to the peace process.

"Here was a loving father, husband, brother and grandfather," he said. "Here was a dedicated Catholic school teacher and principal, a kindly and attentive neighbour, a man of many talents who wasted none of them.

"Here was a wholesome human being who spent himself unselfishly for his family, his local community, his country and for the common good.

"Here was a peacemaker, a 'bridge-builder', a leader, a statesman, and a faithful worker for the Kingdom of God."

The archbishop said Mr Mallon had been determined to make a real difference and leave the world a better place than it was when he entered it.

"People sometimes speak of the 'noble vocation of politics' and Seamus Mallon was a shining example of someone who gives their life in a vocation of service," he said.

"Seamus spoke with the authority and vision that come from having lived through the worst of the Troubles and personally played a central role in the landmark events of our peace process.

"Seamus Mallon was unequivocally anti-violence. Like (Seamus) Heaney, he saw the ongoing bloodshed of the past as a waste of life and a waste of spirit.

"He empathised from his heart with all those who were suffering and his consistent condemnation of violence from whatever source often left him open to insult and unfair criticism.

"But his principles, rooted in a strong faith and in an unstinting commitment to a culture of life, remained steadfast in face of such opposition."

Ahead of the funeral Mass, friends and family members took gifts symbolising Mr Mallon's life to the altar.

They included the former SDLP deputy leader's own memoir, his maiden speech in the House of Commons, a photo of him with Pope John Paul II, a fishing reel, and some golf balls from Co Donegal club Rossapenna.

SDLP deputy leader Nichola Mallon was among those who delivered readings during the service.

Mr Mallon was a former teacher who lived in Markethill, a largely Protestant town, before becoming a politician.

He was a key figure in negotiating the 1998 Good Friday Agreement and, after his death, tributes were paid from across the political divide.

Mr Mallon implemented the newborn political powersharing at the devolved parliament at Stormont and his former partner in government and ex-first minister Lord Trimble said he was a committed democrat who lived up to his word.

At the close of the service, Mr Mallon's long-time friend, Tim O'Connor, a former secretary-general to the President of Ireland, delivered a tribute.

He described him as a "great chieftain of Irish political life".

"The annals will record Seamus Mallon as one of the key leaders of a seminal time in the history of the island of Ireland," he said.

Mr O'Connor hailed him as an outstanding Irish parliamentary orator ranking alongside the likes of Daniel O'Connell and Charles Stewart Parnell.

"Seamus Mallon was a giant of his time," he said.

"That is why today, in this beautiful ceremony in this beautiful church, it is important that we take the opportunity to reflect on, and give thanks for, the sacrifice, endurance, courage and leadership of a man whose contribution has meant a better life and future for every single one of us on this island."