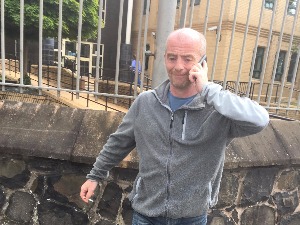 A west Belfast man who claimed he found an arsenal of deadly dissident republican weaponry is in fact a "trusted "individual," a lawyer alleged today.

Opening the Diplock, no jury trial against 47-year-old Kevin Nolan at Belfast Crown Court, sitting in Antrim, prosecution lawyer Michael Chambers labelled his claims of founding the plastic explosives, detonators, guns and bullets in a bag in the city cemetery as "fanciful....wholly implausible," claiming that given the DNA evidence against him, "its more akin to a trusted individual" holding the stash.

Nolan, from the Stewartstown Road in Dunmurry, has gone on trial on six charges alleging that between 1 May and 18 September 2015, he possessed 651 grams of Semtex plastic explosive and two improvised electronic detonators with intent to endanger life, under suspicious  circumstances and "for a purpose connected with the commission, preparation or instigation of an act of terrorism."

The 47-year-old is also accused of having two handguns, a gas pistol and a revolver, along with suitable magazines, a silencer and 386 rounds of assorted ammunition with intent to endanger life, having the handguns without a certificate and  having a balaclava for a terrorist purpose.

Mr Chambers submitted to trial Judge Desmond Marrinan that given Nolan had pleaded guilty to having the guns and bullets under suspicious circumstances, he is also guilty of having them without a certificate given that no such certification exists and he has admitted possessing the items.

Turning to the facts of the case, he told the judge how cops raided the Nolan family home in the Ballymurphy area of west Belfast on 17 September.

In the defendants bedroom, cops uncovered a hold-all below a black in liner filled with teddy bears in the bottom of the wardrobe which when opened, revealed all the items bar the balaclava, all individually wrapped and packages in various ways including in cling film, in socks, a pillow case and a woolly hat as well as CD and DVD boxes.

In a different bedroom, officers found a black coat which had the balaclava in a pocket.

Sent for forensic testing and examination, Mr Chambers said DNA attributable to Nolan was uncovered on the handles of the hold-all, the various things used to wrap the weaponry such as the woolly hat, the socks, cd and DVD boxes and on an X box game container where the detonators were found although he added that DNA belonging to two other people was also found on the bags handles and on a handgun.

Traces of explosives were also found in the pocket of the black coat where the balaclava was found, said the lawyer.

Nolan was not present at the time of the search but was arrested in Sunderland three days later under the terrorist act, telling cops he had left Belfast because "I was accused of stealing something" so had left as "I don't want a hole in the head."

He was subjected to nine police interviews and for the first seven refused to answer police questions apart from giving a prepared statement denying knowledge of the weaponry arsenal.

By interview eight however, Nolan provided a new statement where he claimed that four months earlier, he had been walking through Belfast City Cemetery when he spotted two men stashing a bag in the hedges so he went to investigate thinking it might be drugs or money.

Having retrieved the bag, Nolan told cops he emptied it onto his bed and panicked when he realised what it was "because I was concerned that they would be discovered by the police or dissident republicans who I suspected owned these items."

Mr Chambers recounted how a "go-between" had assured Nolan he would be safe to return to his native Belfast if the items were returned, baldly telling cops he still feared being killed but that "I was happy to take a knee capping rather than being shot in the head."

Nolan further claimed that he was intent on travelling back to NI on the day he was arrested.

Mr Chambers declared however that Nolan has "provided a wholly implausible account" of how he came to have the explosives, guns and bullets which he kept for four months without making any effort to return them.

Despite his claims that "bullets fell" from the bag onto his bed, "it's clear that they were all stored separately, the ammunition was sorted" into the various calibers.

"We say it's fanciful that two persons stored all these items in s grave yard and furthermore, having found these items it's highly unlikely that he would be willing to hide these items knowing the repercussions of stealing such weapons from dissident republicans," submitted the lawyer.