WATCH: Poots - Most dangerous materials will be quickly removed from illegal dump 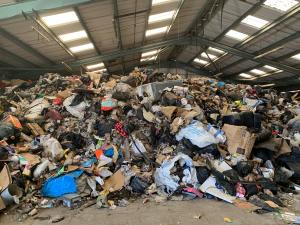 By Q Radio news and PA.

The clearance of illegal dumps in North Belfast should be completed by the end of this week, the environment minister said.

The removal of waste which has attracted rats and flies will be the priority, Edwin Poots said.

He warned offenders they faced prosecution as he urged courts to impose heavy fines on those responsible for fly-tipping.

The minister said: "I would hope it will be moved a lot quicker.

"I believe they will respond quickly to the problem that exists there.

"Hopefully it will be done well before the end of the week."

The scene at a warehouse in the Edenderry Industrial Estate in north Belfast where contractors have begun the task of clearing tons of suspected illegal waste. pic.twitter.com/0QKBbWpy7T

Residents have left their homes due to large numbers of pests associated with the rubbish.

The sites are near the junction of Hillview Road/Crumlin Road and the Edenderry Industrial Estate.

Suspected illegal waste is removed from a warehouse in the Edenderry Industrial Estate in north Belfast. pic.twitter.com/7Y4tVXX8EG

He added: "There is a bit of the white van man scenario who has been doing tidying up around people's homes, bits and pieces involved in fly tipping.

"There may be some people who have set themselves up to handle waste whenever they are not registered waste handlers.

"Due process is what will bring results, by taking these people to court and having them fined and the costs charged to them for the disposal of any materials."

He told the Assembly some of Northern Ireland's recycling centres were still not open.

"Get your act together.

"Get these recycling centres open and provide the service you are being paid to provide."

Contractors begin the task of clearing suspected illegal waste at a warehouse in the Edenderry Industrial Estate in north Belfast. pic.twitter.com/1R4tfLmawj

Mr Poots said: "There will be a robust response to this.

"What has happened is unacceptable.

"It is an illegal site and therefore the enforcement branch of the Northern Ireland Environment Agency will be tasked with carrying out all the investigations and bringing forward a recommendation to the Public Prosecution Service to take this matter to court on the basis of the information that they find."