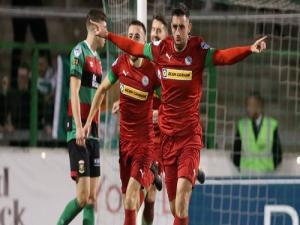 Cliftonville have rejected an offer from Glentoran for the Reds' star striker Joe Gormley.

The north Belfast club issued a statement on Thursday night saying the matter was discussed with Joe but he didn't want to leave Solitude.

The Glens were prepared to pay an Irish League record fee of £60,000.

They have offered a similar amount to Ballymena for their forward, Adam Lecky.

Reds reject Glens Gormley bid@cliftonvillefc: "Cliftonville Football Club confirm an offer was made today by @Glentoran for the transfer of Joe Gormley, which was rejected. Matter discussed with Joe, who informed us he had no interest in joining Glentoran. Issue now closed." pic.twitter.com/osaStnaQqr

Some new signings were confirmed on Friday, including Dungannon Swifts getting midfielder Shane McGinty, who's just left Ballymena United. Earlier ...

Andy Mitchell goes straight into the Larne squad for their game against the Glens at Inver Park on Saturday - 5.30pm kick-off.

The Danske Bank Premiership leaders are aiming to extend their 15-match unbeaten run in the league.

Meanwhile, the Glens have had their allocation for next week's Irish Cup tie at Queen's cut to just 100 tickets.

Better news is the controversial red card given to striker Cameron Stewart in the clash with Crusaders at The Oval has been overturned on appeal.

So @Glentoran going top last Saturday wasn’t a fluke after all! Briefly knocked off their perch through the week, here they are again, #DanskeBankPrem leaders. Other winners today ... @Glenavon_FC @CarrickRangers @CrusadersFC @ColeraineFC pic.twitter.com/XwjVl3Ketk