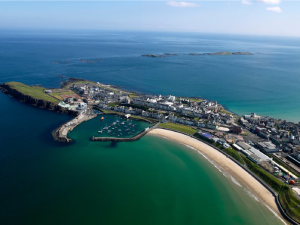 Portrush from the air

Irish golfer Shane Lowry will hope to follow a day he called one of the most incredible of his life with victory at The Open.

He heads into the final round at Royal Portrush with a four-shot advantage at the top of the leaderboard - on 16 under par.

In the race to catch him  is England's Tommy Fleetwood on 12 under, and Americans JB Holmes on 10 under.

Thousands of excited golf fans swarmed over Portrush's sun-drenched dunes as stars of the world game battled it out on the third day of the Open's return to Northern Ireland.

Home favourites Rory McIlroy and Darren Clarke may have missed the halfway cut but that only meant more support for Portrush-born Graeme McDowell and Irish star Shane Lowry on Saturday, as huge crowds cheered them on.

McDowell was not the only local favourite on the course.

Long-time Royal Portrush's club pro Gary McNeill was asked to tee it up in the first group of the day, as the odd number of players meant one competitor was short of a playing partner.

"I might need a lie down after all that," he said after a round that included holing a monster putt on the 17th green.

A half dozen fans from England were particularly disappointed Tiger Woods failed to make the cut, given they had bought full-length furry Tiger suits for the day's play.

They donned them regardless, prowling through the dunes like a hunting pack.

Among the high profile spectators lining the fairways was Irish rugby captain Rory Best and scrum half Conor Murray.

One father was so keen to secure a vantage point to see McDowell coming down the 18th that he abandoned his pram in a nearby bush in the scramble to get a spot.

Fortunately his child had already been taken out before he found the unconventional parking place.

While the vast majority of the home fans were cheering on McDowell, Belfast woman Sara Campbell was focused on his playing partner Bubba Watson.

"I would have loved to have seen Bubba up closer," she said.

"I have followed Bubba for years and wished one of my grandchildren had been called Bubba but nobody would call them Bubba."

Fathers and sons Roy and Frazer Wallace and Stephen and Rory Stewart, all from Lisburn, had McDowell's face printed on their T-shirts.

Their day was made in an instant when the man himself stopped to pose for a selfie with his quartet of super-fans after signing his card.

For the all the tens of thousands delighted to secure a ticket for the Open's famous return, there were some who were not quite so fortunate.

Two young men from Co Meath apparently arrived at the gates with the tickets their father bought them in a sealed envelope.

But when they opened their present they realised the stubs were for the Irish Open, which was staged at Lahinch in Co Clare earlier this month.

A number of others were left regretting not reading the Open website more closely in the early rush to secure tickets last summer.

One Belfast man went to print out tickets for him and his wife earlier this week only to discover that 12 months ago he had actually bought last-minute tickets for last year's Open at Carnoustie, rather than the 2019 version on his doorstep.

Out on the course, dressed in a stars and stripes jacket, tie and shorts, Jason Forrest from Atlanta, Georgia, said he was more used to the manicured greenery of Augusta National rather than the rolling dunes of an Irish links course.

"We try to go to the major golf championships, we go to Augusta frequently and this is a really special time to be in Northern Ireland," he said. "People are very friendly, the golf's been great and very challenging."

"The big names are gone but I'm looking out for Dustin Johnson whose my favourite," he said

A number of the region's politicians were at Portrush on Saturday to catch some of the action.

Among them was Sinn Fein's Stormont leader Michelle O'Neill.

A beautiful sunny start to Saturday at #TheOpen with @newbelfast & @BatesonSean what an amazing event to have on our doorstep. A sporting spectacular with long term sporting & economic benefits to be enjoyed by all. Huge congrats to @royalportrush and all those in involved 👏👏 pic.twitter.com/3VltRLVFiv

"It was absolutely amazing," she said.

"The sun was shining and I'm really impressed with the scale of the event."

Mrs O'Neill said the wheels were already in motion to secure the return of the tournament.

"I'm speaking to some of the organisers, there is certainly a conversation under way about it returning - we look forward to that," she said.

Declan Faulkner, from Ballygawley, Co Tyrone, was at Portrush seven years ago when the course hosted the Irish Open.

"This is a different level, it's just massive - it's a privilege to be here."

"For the Open to be here is just fantastic."

Linda Robb, from Cullybackey, Co Antrim, said she has watched in awe over the last few weeks as the Open infrastructure was built up.

"It's just nice to be part of something and to see Northern Ireland is actually capable of putting on an event on such a scale," she said.

"It does actually make you feel proud that you come from this area. It would be amazing if it came back or something similar - it would be great if this was the start of more things to come now."

Peter Kirk from Bangor conceded he was not a golf fan.

"I quite like the 5th because there's nice views, so we sat there.

"I am supporting my wife who's a golfer."

Barbara Teague, from Portglenone in Co Antrim, walked the fairways with her friends.

"It's been fantastic socially catching up with buddies," she said.

"Watching Rory last night it was very disappointing. It was actually heart-breaking to hear him on the TV. Hopefully Shane Lowry can do it."

She said there was an unexpected advantage of being a female golf fan at the event.

"It's great, there are no queues for the ladies toilets because it's populated by the male domain."

No doubt about who home fans are supporting @royalportrush Shout of “’Mon big man!” from fan watching @ShaneLowryGolf on big screen. Irishman leads #TheOpen⁠ ⁠ going into closing stages of day 3. Atmosphere electric. American lady tells Q “You should have it here every year!”👍🏿 pic.twitter.com/K0u94k3Fov