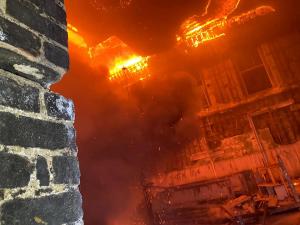 The blaze began at 2:43am this morning in the old court room with 25 fire fighters attending the scene.

The site has been derelict over recent years and has been the site of numerous fires over the years.

📷 Firefighter at blaze at derelict Crumlin Road courthouse in North Belfast.
The fire started before 3am this morning with 25 fire officers attending the incident @NIFRSOFFICIAL @nifrseast pic.twitter.com/KRj5eFeQSN

3 fire engines and an aerial appliance were all used to bring the blaze under control.

Whilst there was no damage to other nearby buildings, at one point, fire officers were stationed at the rear of the old court house to ensure the fire did not spread to nearby houses.

📷 @NIFRSOFFICIAL are treating a fire at the old courthouse on Crumlin Road as 'deliberate,'

The derelict building has been the site of numerous arson attacks over the years.

At one point, officers were concerned that the blaze could spread to nearby houses. (Pic @nifrseast ) pic.twitter.com/yuIFMN8HZI

Fire officers at still at the scene of the blaze.

The Northern Ireland Fire and Rescue Service said the cause is believed to be "deliberate ignition".

The courthouse closed in 1998.

It was in use for around 150 years and connected via an underground passageway with Crumlin Road Gaol.

The grisly crimes of the Shankill Butchers, the "supergrass" trials, that of senior loyalist and peace process figure Gusty Spence and Shankill Road IRA bomber Sean Kelly were held there.

It has planning permission to be converted into a hotel and has been put up for sale by Liverpool developer Signature Living.

Belfast Buildings Trust has said it is "deeply saddened" by last night's fire.

Shane Quinn, Development Manager of BBT, said “It is hugely troubling to see yet another fire cause yet more damage to the building, and especially to hear that it has been started deliberately. We thank NI Fire & Rescue Service for their quick actions.

"The Courthouse’s physical history and the personal stories associated with it say so much about Belfast. BBT has worked with various agencies and owners over the years.

"We obviously need to wait and assess the full extent of the damage, but we remain convinced that a suitable use can regenerate the building and be a catalyst for wider regeneration in north Belfast.

"Unfortunately, we’ve grown all too used to historic buildings in the city being destroyed by fire. But, as we saw after the Bank Buildings fire, historic buildings are often at the very heart of our city’s lives and hold huge meaning for people.

"We all have to recognise that heritage buildings aren’t about the past. Everyone in Belfast now has a responsibility to make sure that we double our efforts to find a long-term use for the Crumlin Road Courthouse. No building is beyond saving.

"The Trust believes that whilst last night’s fire is devastating for the city to wake up to, with determination and the involvement of local people, we can make sure heritage is at the heart of our city’s regeneration.”