Let The Music (Lift You Up) 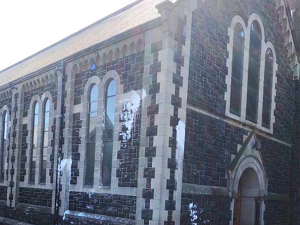 There have been calls for protection for churches in Northern Ireland after figures emerged showing almost 450 attacks in three years.

There have been 445 crimes recorded as criminal damage to religious buildings, churchyards or cemeteries across the last three years.

This is equivalent to a crime against a place of worship happening almost every other day.

Some of those attacked included Saintfield Road Presbyterian Church which suffered two arson attacks in July 2016, while the Sacred Heart Church in Ballyclare was attacked with paint on Easter Sunday this year.

Both the Belfast Synagogue and Belfast Islamic Centre have also suffered property damage in the last 10 years.

The figures were obtained from the PSNI by the Christian Access Research and Education (Care NI) using the Freedom of Information Act.

Care NI has written to the leaders of all the political parties asking for more support to be made available to religious buildings.

It has also urged them to make a specific manifesto commitment to set up an initiative like the Place Of Worship fund which helps protect religious buildings in England and Wales.

"Following two arson attacks on our church in July 2016 the initial response was one of anger and frustration quickly followed by asking 'Why'," he said.

"There then came a sort of grieving period as we grappled with the practicalities of how to manage the restoration of the buildings.

"As a congregation we would welcome any initiatives by Government to protect churches from further attacks."

"In a free and democratic society, no-one should be afraid of gathering together with those who share their faith in a place of worship," he said.

"The security protection funding scheme which is available in England and Wales for places of worship should be extended to Northern Ireland as a matter of urgency.

"We will be writing to all party leaders, calling on them to include a manifesto commitment to introduce such a scheme, which would undoubtedly be welcomed across NI."

"Places of worship, no matter what faith or denomination, should be a cherished place of peace and sanctuary," he said.

"Attacking a church is an attack against its entire congregation.

"Whilst some attacks are acts of mindless vandalism, unfortunately in Northern Ireland the scourge of sectarianism remains and this has been the motivation behind many attacks on local churches across the country.

"Under the UK Government's Hate Crime Action Plan, funding is available to fund additional security measures for places of worship, but only in England and Wales.

"It is now time that this protection was extended to premises and faiths in Northern Ireland."