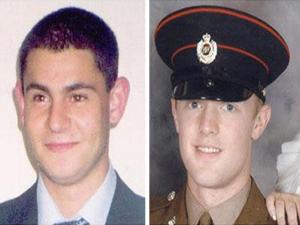 Detectives investigating the killing of two soldiers as they prepared to depart for Afghanistan have said their families deserve justice.

Almost 2,000 interviews have been conducted by police probing the shooting of Patrick Azimkar, 21, and Mark Quinsey, 23, by dissident republicans as they collected a pizza delivery outside Massereene Army Barracks in Co Antrim a decade ago.

Only one person has been convicted for offences involved in the murder by providing the phone used to make calls claiming the attack, police said.

Detective Chief Superintendent Raymond Murray said: "Our thoughts today are very much with the families of Sappers Mark Quinsey and Patrick Azimkar whose ongoing grief, pain and hurt must be unimaginable.

"It is also a poignant day for those who were injured and maimed, and now live with the physical and psychological scars of that fateful attack.

"It is our appeal today that anyone who has information about the attack and those who carried it out would come to the police with that information which may open up new lines of enquiry.

"One person has been convicted for offences involved in the murder by providing the phone used to make calls claiming the attack, however it is the killers themselves who we want to bring before the court."

He said he investigation had been long and complex.

Mr Murray added: "Today, on the 10th anniversary, I would appeal to those who know anything about the events of that night to come forward to police.

"Lives have been brutally taken and the lives of their loved ones changed forever.

He said there are people in the community who know exactly what happened and who was involved.

"A decade has passed and with that allegiances change and people's circumstances alter. It is never too late to come forward.

"The Azimkar and Quinsey families are facing yet another year without their loved ones and they deserve to see those involved brought to justice."