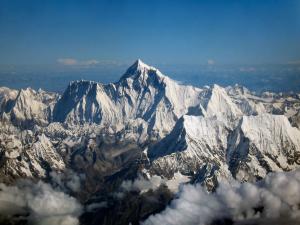 An Irish climber has died while attempting to climb Mount Everest.

Kevin Hynes, 56, died in his tent at 7,000 metres in the early hours of Friday, after turning back before reaching the summit.

The father of two was part of a group from UK-based climbing company 360 Expeditions which was attempting to scale the world's highest mountain.

His death comes a week after Trinity College professor Seamus (Shay) Lawless, from Bray, Co Wicklow, fell during his descent from the peak having achieved a lifetime ambition of reaching the summit.

A recovery operation is under way.

In a statement, 360 Expeditions said: "It is with the greatest sadness that we have to confirm that one of our Everest team has passed away.

"Kevin (56 yrs) was one of the strongest and most experienced climbers on our team, and had previously summited Everest South and Lhotse."

The Department of Foreign Affairs said it was aware of reports of the death of an Irish citizen on the north slopes of Mount Everest.

"We stand ready to provide consular assistance," a spokesman said.

But on Thursday, while other climbers in the team headed higher, Mr Hynes began his descent accompanied by experienced Sherpa Dawa Sangee, who had himself made the summit of Everest South twice, Everest North and Makalu twice.

"Kevin passed away in his tent at the North Col at 7,000m in the early hours (Nepali time) of the 24th May," the company confirmed.

"His wonderful wife, Bernadette and two children, Erin and James are comforted by all the communication that Kevin sent out from his expedition, letting them know that, 'this was proving the most fun he had had on any one of his expeditions and the team was amazing and that he was loving being with (mountaineer) Rolfe Oostra'."

The company added: "Our heartfelt thoughts and condolences are with all Kevin's family and his friends. He really was a wonderful man and it was a great privilege to have him on our team."

The latest search to locate Mr Lawless, 39, got under way on Wednesday, close to where he fell.

Eight high-altitude Sherpa climbers are involved in the operation.

Irish premier Leo Varadkar said the country's foreign affairs minister Simon Coveney had been in close contact with Mr Lawless's family and that the government would assist them in whatever way possible.

The family of the father of one launched a fundraising campaign to help finance expensive search and recovery efforts.

His relatives, who said Mr Lawless's insurers were not assisting in the search, set up a GoFundMe page seeking the public's help to raise the money needed to gather a team of Sherpas to find him.