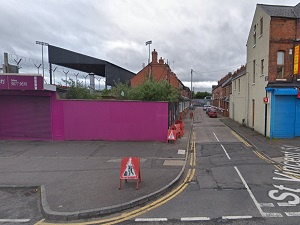 It happened in the St Vincent Street area

Two children have been left badly shaken, after three men armed with shovels broke into a house in North Belfast.

Two adults were also inside when it happened on St Vincent Street - next to Crusaders Football Club - early hours this morning.

No-one was injured and nothing was taken.

It's believed the men made off in a black Peugot.

“It was reported that, just before 2.50am, three men entered the property.  The three, armed with shovels, rummaged through the house."

“Nothing was taken and, thankfully, no one was physically injured.  However, this was a terrifying ordeal for the two adults and two children who were in the house at the time and who have been left badly shaken."

“It is believed the men may have made off in a black Peugeot."

“We are appealing to anyone with information, or who noticed any suspicious activity in the area early this morning, to contact us on 101, quoting reference number 256 of 14/09/19."

“Alternatively, information can be provided to the independent charity Crimestoppers on 0800 555 111, which is 100% anonymous and gives people the power to speak up and stop crime.”