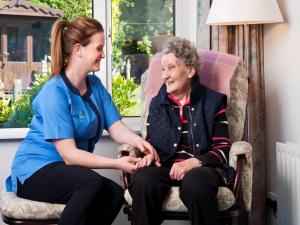 Nurses in Northern Ireland plan to take strike action on December 18 in a row over pay and staffing levels.

The walkout is expected to last for 12 hours, the Royal College of Nursing (RCN) said.

Pat Cullen, director of the RCN in Northern Ireland, said: "Nurses are very disappointed that there has been no further meaningful engagement with the Department of Health regarding the safe staffing and pay crisis that we are facing in Northern Ireland.

"RCN Council has now approved a schedule of industrial action and strike action. Regrettably this will begin before the Christmas period."

She said her members had been left with no choice and would provide further details about the impact on services closer to the time.

More than 8,000 RCN members were balloted and the response rate was 43%.

The RCN said 96% of those members who returned their ballot papers voted to take industrial action and 92% voted to take strike action.

The first day of industrial action will be Tuesday December 3.

Industrial action, short of strike action, will include declining to do any task that is not patient-specific.

The action comes amid a dispute with Health and Social Care (HSC) management in Northern Ireland over pay rates and staff shortages.

The Department of Health has previously said the budgetary pressures across health and social care were clear for all to see.