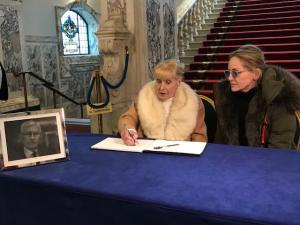 Tributes are being paid after the death of Northern Ireland peace campaigner Betty Williams.

She was a founding member of the Peace People movement at the height of the Troubles.

The west Belfast woman was awarded the Nobel Peace Prize in 1976, along with fellow activist Mairead Corrigan Maguire.

Betty's last public appearance was in January when she signed a book of condolences in Belfast for the late Deputy First Minister Seamus Mallon.

The 76-year-old was accompanied to City Hall by her friend, Hollywood actress Sharon Stone...

🎥 Tributes pour in from across the globe for former @SDLPlive politician, key player in Northern Ireland peace process Seamus Mallon. Hollywood star @sharonstone on visit to Belfast has signed a book of condolence @belfastcc & spoke to @qnewsdesk with friend Betty Williams: pic.twitter.com/OSovD6CvSy

Betty Williams died tonight. “The Nobel Peace Prize is not awarded for what one has done, but hopefully what one will do.” The words of Betty Williams who in 1976 along with Mairead Maguire was awarded the Prize for her work to bring peace in her native Northern Ireland

We are so sad to hear of passing of Nobel peace laureate Betty Williams. Her legacy & incredible work for peace in Northern Ireland, with a passion for love & the rights of children in war everywhere, will never be forgotten. Sending solidarity & love to her family & friends. pic.twitter.com/k1KjHaCDXd