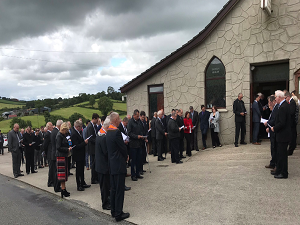 His coffin was draped with a union flag.

A forthright campaigner for victims of republican violence, Mr Frazer's father Bertie and several other family members were killed by the IRA.

He set up the group Families Acting for Innocent Relatives (Fair) in 1998 to support victims of republican violence.

Mr Frazer had many supporters in the loyalist community, but was seen as divisive by many republicans and nationalists.

He once said he had received enough death threats in his life to paper the walls of his house with them.

One of his longest campaigns had been aimed at securing justice for the families of 10 Protestant workmen shot dead by republican gunmen at Kingsmill in south Armagh in 1976.

His funeral today heard his coffin passed the point in the road where the infamous shooting took place on the way to the gospel hall.

Many of the Kingsmill families attended the service.

Mrs Foster was among those who addressed the mourners, recalling Mr Frazer, who she had one time represented as a lawyer, as someone who fought for justice.

"Despite all the hatred and and all the bile that was directed at him from republicans, he kept going.

"We have all lost someone who was witty, original, unvarnished yes, but was very much the real thing.

"I will very much miss William for many reasons."

Independent councillor Paul Berry also addressed the funeral, describing Mr Frazer as "fearless", a "true Ulsterman" and urged that someone "takes up the mantle" in his absence.

"To his last breath, he continued to fight for justice," he said.

"Willie may be gone, but his legacy will live on.

Final journey. Funeral service for victims’ campaigner Willie Frazer ends at Fivemilehill Pentecostal Church near Bessbrook ahead of burial at nearby graveyard. pic.twitter.com/avqWHBAaYI

"Those who try to rewrite history must not be allowed to go unchallenged. I trust someone will take up the mantle."

Mr Frazer died at the age of 58 on Friday after losing his long battle with cancer.

He is survived by his wife Ann, son Phillip and wider family circle.