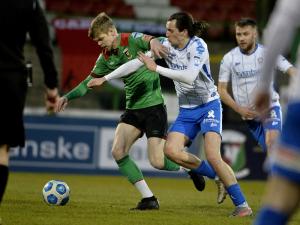 Glentoran and Coleraine drew 2-2 in the second against third clash at the Oval last night.

A freak own goal from 40 yards out by Coleraine's Josh Carson ensured a share of the spoils.

So the Bannsiders reduce Linfield's lead at the top to nine points with Glentoran two points further back.

Possibly the best own goal ever 😮

Meanwhile, Derry City lost for the fourth time in a row at the start of the League of Ireland campaign.

They went down 2-0 at home to Shamrock Rovers and the Candystripes remain rooted to the bottom of the table.