World Of Our Own

Healy closes in on title, sees red over abuse and sets sights on new deal for star striker 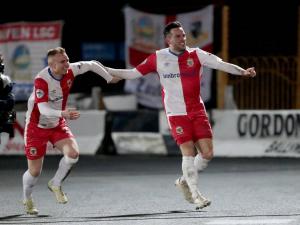 Linfield all but clinched the Danske Bank Premiership title last night with a 1-0 win away to second-placed Ballymena.

Andy Waterworth scored the only goal at the start of the second half to send the Blues 12 points clear at the top.

It means David Healy's men only need a draw from their remaining four fixtures (starting with Crusaders at Windsor next week) to lift the Gibson Cup for the second time in three years...


The Northern Ireland goalscoring legend said after the match talks have been continuing with Waterworth about a new contract.

Meanwhile, Newry City beat Ards 3-0 in the basement battle to move above their relegation rivals.

Stephen Hughes, Mark McCabe and Tiarnan Rushe scored for the home side.

A win that has been a long time coming but certainly well deserved. Every single player super tonight with the fans playing their part as usual. Plenty of football still to be played but good start to what is a massive month for us #NCAFC 🔵⚪️

TABLES | @OfficialBlues move 12 points clear with four games left, while @NewryCityAFC leapfrog @ArdsFC1900 at the bottom in the battle to avoid the drop #DanskeBankPrem pic.twitter.com/oWpxCgUOzX

Derry City are up to third in the League of Ireland after a 3-2 derby win at 10-man Finn Harps.

Defender Colm Deasy got a straight red for a challenge that saw Derry's Ciaran Coll stretchered off near the end of the first half.