Shiels: NI qualifying for Euro 2022 would be "greatest sporting achievement of all time" 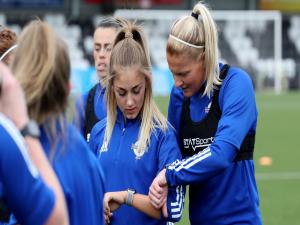 Kenny Shiels says it would rank as one of the all-time greatest sporting achievements if Northern Ireland Women qualified for Euro 2022.

Shiels' side, who are a mixture of professional and amateur players, are 90 minutes away from qualifying for their first major tournament after winning 2-1 away to Ukraine in the first leg of their play-off last Friday.

The second leg takes place in Belfast on Tuesday.

Time we were at a major finals? Countdown's on for Northern Ireland's women footballers, 2-1 up from the Euro play-off 1st leg going into tomorrow night's home tie v Ukraine at Seaview. They've made history getting there, now Kenny Shiels' #GAWA girls want to finish the job:

"You can't have those thoughts before you play an opponent," replied Shiels when asked about what qualifying for Euro 2022 would mean for women's football in Northern Ireland. "Equally we don't want to supply them with motivation.

"If we get through it would be a remarkable achievement from the girls, probably the greatest sporting achievement of all time unless Grimsby won the Premier League. Most of the team are amateurs, working in hospitals, banks, supermarkets."

🎥 NI boss Kenny Shiels ahead of Tuesday's Euro play-off second leg against Ukraine in Belfast. "We're on the verge of something really good but we haven't fulfilled that yet. There's a long way to go." 2/3#GAWA pic.twitter.com/Bo8jwLa6Cz

Shiels says qualification would provide a boost for the country.

"We came through hard times during the Troubles," he added. "It wasn't the government or anybody else who brought us through that - it was our sport.

"Football is the only working-class sport in Northern Ireland that accommodates all religions and communities, and we did it right through the 20-odd years of the Troubles.

"I'm so proud of football for giving us that platform to educate people and help them to understand that everybody is good no matter what colour or religion they are."

There are also men's matches on Tuesday night:

Some schedule changes for the weekend:

Saturday afternoon's Danske Bank Premiership matches have been rescheduled due to the funeral of Prince Philip. NIFL details below.

The annual youth football competition Super Cup NI has been cancelled for a second year because of Covid-19.

Sport on air on the hour pic.twitter.com/ecjWHdT9su

Meanwhile, there'll be a change of scenery for the latter stages of the Irish Cup:

Irish Cup final and semi-finals to be staged in Lurgan.

Finally, a reminder of just how good Stuart Dallas is!

Stuart Dallas says he's benefitting from being such an adaptable player for Leeds boss Marcelo Bielsa.

The Northern Ireland international scored twice in a shock 2-1 Premier League win over leaders Manchester City at the weekend.

We hear from the #GAWA hero on air on the hour pic.twitter.com/Cw9YVIQXCs