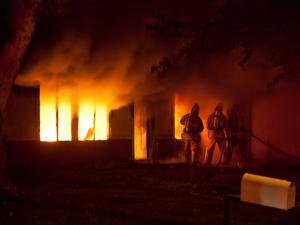 The fire service has lowered the age of those it considers to be at most risk of dying in house fires to 50, due to "stark" new statistics.

Over the past three years, almost 90% of the 19 people across Northern Ireland who lost their lives in burning buildings were aged 50 or over.

Alan Walmsley, NIFRS assistant chief fire and rescue officer, described the statistics as "stark" and said they had prompted the service to lower its definition of those at risk from 60 to 50.

The NIFRS says the move will enable it to work, in conjunction with more than 80 partner agencies across the voluntary and statutory sectors, to target fire safety resources where they are needed most.

The aim is to further reduce the number of accidental house fires and resulting injuries and deaths in Northern Ireland.

Mr Walmsley said the reality is you are at a higher risk from a house fire if you are over 50.

"Whilst fire safety is an important issue for everyone, we can't ignore the fact that there are people who because of their age and circumstances are at higher risk," he said.

"The reality is if you are aged 50 or older you are more at risk from a house fire.

"It's a stark statistic that over the last three years 89.5% of those who have died in accidental house fires were within this age group."

He continued: "Almost 90% of these were people living alone. With an ageing population and a greater emphasis on supporting people to live independently at home, we need to make sure that our fire safety preventative measures are targeted at people most at risk from fire.

"If you are aged 50 or older and you are concerned about your own fire safety or indeed the fire safety of someone in your community you can find out more advice or register them for a free Home Fire Safety Check by visiting our website www.nifrs.org.

"We must do all we can to help stop fire - one life lost is one too many."