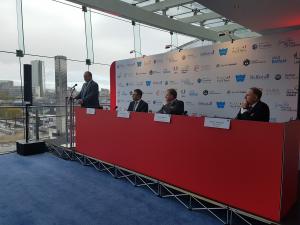 Air passenger duty (APD) is acting like an anchor on tourism growth in Northern Ireland, an airport boss has told a major airline conference in Belfast.

Graham Keddie, boss of Belfast International Airport, said scrapping the tax would deliver a dramatic increase in air traffic to and from the region.

Currently passengers departing or arriving in Belfast on short-haul flights must pay £13 APD each way.

Five years ago the Stormont Executive secured powers from Westminster to scrap APD on long-haul flights.

But local ministers have refused to follow suit with short-haul services, claiming the move would be financially unviable due to the required counter-balancing loss to block grant funding from the Treasury.

At the Routes Europe conference in Belfast, which has brought representatives of more than 110 airlines to the city, Mr Keddie stressed the need for a rethink.

"It's like an anchor on us, pulling us back," he said.

"If you got rid of APD you'd see traffic grow dramatically."

He added: "We have had one airline that have said if APD goes we'll give you a million extra seats, we've had other airlines that have said similar things."

Brian Ambrose said it would deliver a "step change" for the tourism industry.

He said his airport lost a Madrid route last year to Cork, and was told the reason was the lack of APD in the Irish Republic.

"The additional income to the economy will offset that loss (from the block grant), so it's a net benefit," said Mr Ambrose.

"Once we get that understood then I think it has to go."

The current political crisis in Northern Ireland - the region has been without a functioning government for almost two months - means movement on APD will not materialise in the short term.

Mr Ambrose added: "The airlines will commercially commit to growing the market if there is a reduction in APD.

"One of the first things we want to engage with when we get a minister back in place is a timescale to reduce APD to allow us to get exponential growth.

"While it (APD) is devolved for long haul, 99% of our business is not long haul, so it's not really making any great impact.

Airline bosses and tourism bodies from across the continent are spending three days in Belfast for the conference.

Their presence has already paid dividends.

Mr Keddie said he would announce six new international routes from his airport later this week as a result of a deal struck over the weekend.