As I Lay Me Down 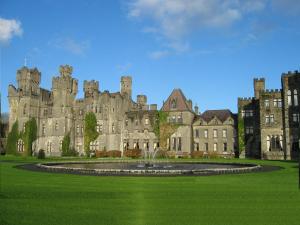 Golf star Rory McIlroy is expected to marry his sweetheart Erica Stoll in the west of Ireland today.

The lavish ceremony in the 13th-century Ashford Castle is being billed as the wedding of the year, with the rumour mill in overdrive about who will be flying in for the celebrations.

The exclusive estate, in the village of Cong in Co Mayo, is no stranger to stars from as far back as the 1950s when it was the setting for screen classic The Quiet Man starring John Wayne and Maureen O'Hara.

Stevie Wonder was being talked about as the star performer, along with a supposed guest list to include Niall Horan of One Direction and a possible flying visit from Ed Sheeran.

It has been on lockdown since Thursday, with staff and guests asked to wear wristbands for security checks.

McIlroy revealed in a recent interview that he was friends with Ms Stoll before romance blossomed.

She was credited with getting the star to the first tee on time for his singles match in the 2012 Ryder Cup "Miracle in Medinah" after he missed his alarm.

For anyone wondering what a multi-millionaire golf star has in mind for a honeymoon, McIlroy said he was planning something in "the middle of nowhere".

Locals have been hoping to capitalise on the latest celebrity to cross their path.

Gerry Collins, founder of The Quiet Man Museum in the village and film location walking tours, wondered if the newlyweds might recreate that scene on the golf course or another when O'Hara was flung on to the bed, only for it to break.

Mr Collins said: "That'd be a great start to a wedding and married life wouldn't it?"

He added: "This would remind you of 1951 when John Wayne stepped off the train in Cong, or Ronald Reagan in 1984.

"There's a big buzz around Cong but we don't know anything, it's just what we can see out the window."