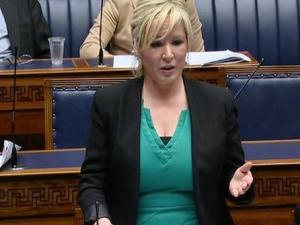 Attempts to resolve Northern Ireland's political crisis have been made more difficult by the snap general election, Sinn Fein and the SDLP have warned.

SDLP leader Colum Eastwood accused Theresa May of throwing "a grenade into the middle" of the peace process.

Michelle O'Neill, Sinn Fein leader in the region, said the Prime Minister had shown a "blatant disregard" to the people of Northern Ireland.

Talks have reconvened between Stormont's political parties and the British and Irish governments in a bid to restore the collapsed institutions.

However, Mr Eastwood said that by calling a general election the Prime Minister has sacrificed the opportunity for Stormont parties to reach an agreement to restore the powersharing government.

He said the announcement of a general election has now thrown the process into uncertainty. Mr Eastwood admitted it was now going to be "very difficult" to reach a deal by the deadline of early May.

"The British Prime Minister threw a grenade into the middle of our peace process. She has sacrificed the opportunity for progress.

"That doesn't mean we are walking away, we are still here. We will keep meeting until we can get this powersharing establishment up and running. The British Government seems to have walked away from it. They need to get back around the table," said Mr Eastwood.

He added: "While Theresa May goes off and tries to destroy the British Labour Party we still have a job to do in Northern Ireland and we are not about to give up on that."

"It's a pity the British Government thinks so little of Northern Ireland that they call an election in the middle of our talks process."

Ms O'Neill said the Prime Minister's announcement of a general election was about "the Tory party's self interest".

"Theresa May has shown a blatant disregard for the people of the north again. We remain committed to trying to find a way through these issues, albeit it is more complicated because of Theresa May's decision," she added.

However, he added that the DUP was ready to form an executive in Northern Ireland.

"We do not believe in setting red lines and preconditions above issues affecting health, education and the future of our public services. So that Executive is being held up by others," he added.

Stormont's parties have yet to reach agreement on forming an executive six weeks after the assembly election.

Talks to save devolution stalled before Easter with little hope of a deal.

The region's two largest parties, and former powersharing partners, the DUP and Sinn Fein, have spent weeks blaming each for the failure to restore the institutions.

Long-running rows over a proposed Irish language act and deep divisions over how to deal with the legacy of the Troubles are holding up a deal.

Secretary of State James Brokenshire recently warned that there will either be direct rule from Westminster or another election if there is no agreement reached by early May.